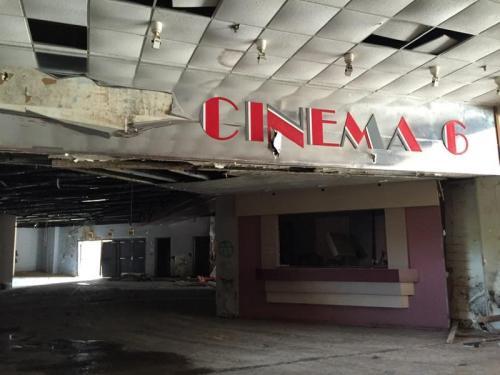 This theater was inside the Market Place Mall and had 6 screens, opening on August 16, 1985 by Circle Theatres. Closed in late-1999, the entire mall was demolished in 2015 to make way for a new shopping center.

The theater closed in late 1999. The mall had been in decline for a number of years.

This theater originally opened around Fall 1985. It was built in a then new shopping center across the street from what was Freestate Mall. Keep in mind these aren’t huge malls like Tysons or Springfield, or Landover or Annapolis. While the mall tried to get anchors, none were larger then the Safeway grocery store that was there until the place was razed for the open shopping center that is currently built now.

I recall there was a poster of the venue on the side where Safeway anchored the mall. It was originally called Showcase, the Circle Theaters suburban brand name. The theater had six theaters with only one auditorium that had stereo. On the poster ad it touted 70mm capability, probably the one with the surround speakers, which I’m guessing was #5 or #4. On the marquee after the name, one could see what was booked in the stereo theater as it had the Dolby symbol.

When you entered, there was a corridor with the auditoriums on the left and right. There was this what I’d call a ‘grand’ carpeted stairway that probably led up to the projection booths upstairs. Given the size occupied by the auditoriums, it would be reasonable to assume the upstairs must’ve been quite big. No balconies, of course, but who knows..maybe they could’ve been built in but were not.

I remember seeing Commando (1985), with my Mom’s relative’s daughter (I forget how she’s related now). The movie was violent and had those Arnold zingers. The James Horner score I recall had Carribean elements that could be heard surroundly. :)

In 1986, I saw Little Shop of Horrors with my older brother. We then snuck into see Star Trek IV, which was a disappointment being in mono. After experiencing it in 70mm THX at the then new Multiplex Cinemas and at the KB Montgomery Mall in 70mm, it was quite a let down aurally. I remember leaving before the movie was over and then being caught by the Manager for sneaking in. My brother was mortified and embarrassed. My explanation to the Manager at the time, was that I was curious about the technical aspects of the auditorium compared to the stereo one (which is partly true). As she went to call Security or the police, we ran out. My brother was pissed at me for talking him into it as he was about to start his Seminary education. :)

In 1994 or so, the stereo theater got DTS. I recall they were advertising the fact they were playing the Jurassic Park II trailer in DTS, which was basically the T-Rex THUMP…THUMPTHUMP.. THUMP THUMP THUMP in deep bass and vibration and the foot impression of the T-Rex.

I dragged my parents to see Jurassic Park II when it did open here in DTS. My Dad complained it was too loud and that I was to blame for his good ear becoming deaf. Yeah. The experience, even in DTS, was nothing compared to the DTS THX experience I remember watching the original Jurassic Park movie in Hollywood. Mom fell asleep. :)

When the Hoyt multiplex opened in ‘96/'97 (now run by Regal), this venue was pretty much deserted. Though I believed it could’ve made a decent $1 movie house or second run discounted place, its demise was only a matter of time. Across from the theater, there was an arcade and pizza place, so it was a decent place to get together for a meal and a movie for its time. Come to think of it, they could’ve ran counter programming to the Hoyt/Regal mplex booking foreign movies, documentaries and such that you’d see in a Landmark Theater today. There weren’t Landmark-type venues back then. Just my 2c.