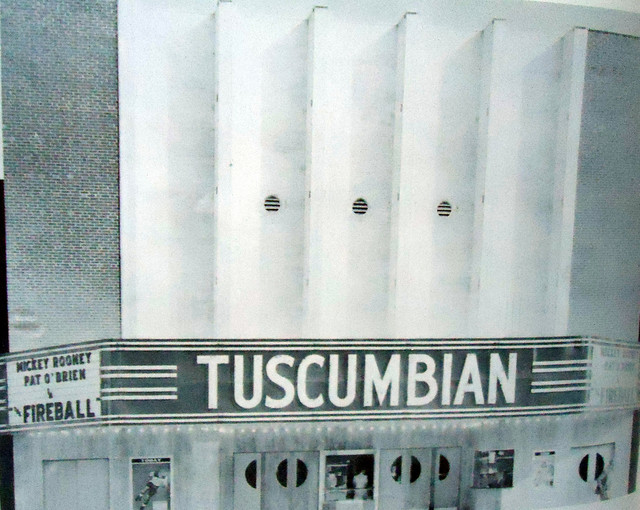 The Tuscumbian Theatre opened on Thursday October 12, 1950. The theatre was located on Main Street in Tuscumbia.

Great ad Mike,thanks for putting it on CT.

oh,Allan 0318,plez share your stories with us about the Tuscumbian Theatre!

I saw tons of movies in the Tuscumbian in the late 60s and early 70s when I was in the area going to college. I remember before the movie started they had a color wheel that was aimed on the curtains that were closed over the screen, changing the color of the curtains as you listened to the music. They played an amazing selection of music. With its close proximity to Muscle Shoals, they played a lot of music recorded there at the time. Obscure stuff that only got played in the Muscle Shoals area. I would be totally amazed hearing “Where’s Eddie” by Lulu, “Making Love at the Dark End of the Street” by Clarence Carter, “Just Don’t Know What to Do With Myself” by the Mauds, and even some selections from Cher’s 3614 Jakcson Highway sessions before the showing of CHASTITY. We ALWAYS arrived early to hear what they were going to play and await the opening of the curtains for the movie to begin. I regret I never sought out the person who SELECTED the music….

Well, it probably wasn’t the projectionist all mine would play was lousy Glenn Miller music.

More accurate address is 117 SOUTH Main Street. It is still standing, has a modern facelift AND has a FOR SALE sign in the window. Man, would I LOVE to get inside and see what is left of the old theatre! Current picture above is not the correct building but hopefully, someone will read this and let me put in the correct building.

A friend and I named a historical Tuscumbia blog after this theater as we have so many memories of it. The link may be found at: http://tuscumbian.wordpress.com/

Great blog! Thank you very much for responding. Would love an update on the theatre. Is it still empty? for sale? Current picture would be great!

George Carpenter and his wife just bought the bank building with included the Tuscumbian. I heard they plan to mothball the theater part. The stage is still there. Then seats are in the Ritz theater in Sheffield. Please consider writing a column for The Tuscumbian. We started it for the community.

I took a picture of what remains of the theater and will post on Facebook ‘Remember Tuscumbia’ page in the Helen Keller Festival album. The building still has a for sale sign on it Knight Humphries, Inc. after a month. I’m wondering if the deal fell through?

The address cannot be right. 117 is a small commercial building on the south corner of the block. The mutilated remains of the theater got a terrible remodel to ‘match’ the old bank on the north corner. Looks like the address was 103 or 105 S Main. Still vacant on the 2016 streetview.