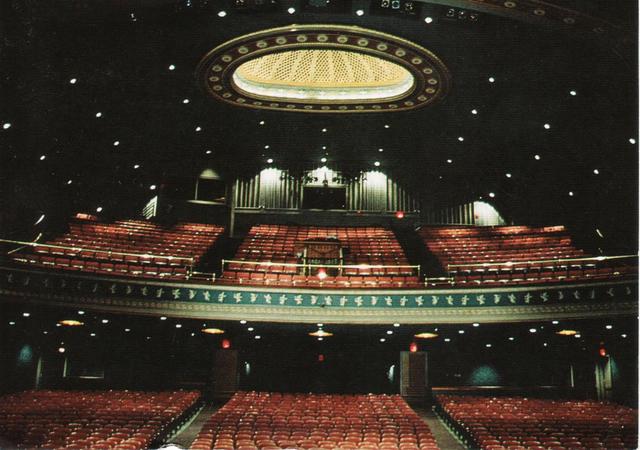 The Reg Lenna Civic Center was first opened on February 5, 1923 as the Palace Theatre, a “High Class Vaudeville” house. Films, usually a short comedy plus a feature, were shown before and after the twice-a-day vaudeville performances. Three years later Nikitas Dipson bought the facility and continued with film and vaudeville shows. In 1930 Dipson leased the Palace Theatre to Warner Brothers for 20 years.

For a short time the format of films and vaudeville was continued, but live performances were slowly downplayed to emphasize the cinema. By 1934 films were the only entertainment available on a regular basis. In 1950 Warner Bros. terminated their lease and Dipson Theatres, still the owners, once again took over management.

The Palace Theatre was remodelled to the plans of architect Michael J. DeAngelis, by modernising the front & marquee plus the lobby, redecorating the auditorium, installing new heating and cooling systems, carpeting, wall coverings and new seats. At the reopening Dipson reaffirmed his intention to feature not only first run films of the best quality, but also stage shows, orchestras and vaudeville. In 1956, “Forever Darling”, starring Lucille Ball and Desi Arnaz, had it’s world premiere at the Palace Theatre (Jamestown being Ball’s hometown). With the passing years, fewer and fewer people attended the theater, equipment was wearing out, and the building needed repairs. On September 10, 1981, the last movie was shown: “The Night the Lights Went Out in Georgia”.

At that time, many of us in the Jamestown area assumed that the Palace Theatre would be left to decay, as was the other vintage cinema in town (the Winter Garden Theatre). However, the community gathered in force to save the Palace Theatre.

In 1990, it was renamed the Reg Lenna Civic Center, in honor of the principal donor for its restoration, and has been completely and lovingly restored; with the addition of new and/or refurbished seating, air conditioning, stage and sound equipment, and projection units. The Reg Lenna Civic Center is now a state of the art performance space; which retains all of the unique design qualities it originally had.

In the early 60’s there was a fire that gutted the Wintergaden pretty badly. When the theatre was restored, half the balconcy was removed, and the house was simply painted, none of the ornate features were restored. The stage and pit were also removed at this time.

There is a small space under the screen where these is some storage space for the marquee letters. Now here is a trivia fact the marquee for the Wintergarden was large enough to accomidate seven rows of letters. It was a real scary thing climbing a latter and changing them, especially on the downward (the side facing Third street) as it was on a hill. In the winter it was not uncommon to see only two lines on that side of the marquee.

It is true that in its last few years of life it was in bad shape. The original red neon block two level Winter Garden sign was half out, the neon inside the marquee was dead, they even went so far as to install for spots lights to shine on the marquee. The underside of the marquee had neon that had also been removed, and the original box-office covered.

The WinterGarden died a most horrible death for a grand old lady, and today sits empty.

BTW- the seven theatres downtown? The Roosevelt, Strand, Royal, & majstic – all were in Brooklyn Square, distroyed in the early 70’s – I have no memory of them. The Palace (now the Reg Civic Center, The Allen Opera House (then Sheas Theatre and now the home of the Lucille Ball Little Theatre)

I am looking for old photos of any and all of the old theatres of my hometown, or just great old stories for my personal website (Remember I am a theatre geek) If you have them, contact me at , or post them to me via my website www.samanthakitty.com I have opened 12 “New Grand Mega-plexes” for my employer over the years, but there is “Nothing like a dame” ..

Movie Bob: Great to read your post about the Wintergarden so I will be sending you a personal email very soon!

I’m posting some links to inside photos of the Wintergarden on its page today.

I just saw a wonderful Tribute to Frank Sinatra at the Reg tonight so if you get a chance to see and hear Tom Tiratto…..you won’t be disappointed. http://www.sinatra-tribute.com/index.html

This is a special theatre and one that was saved by the late Reginald Lenna and his generous contribution. Thanks Reg.

The photo provided above by Lost Memory shows a drab, univiting marquee that most people wouldn’t give a second look at. However, when you look at the home page for the Reg Lenna website, the auditorium looks quite handsome and a very pleasant contrast to the outside face to Jamestown. It’s a shmae that the marquee doesn’t appear to equal the quality of the interior.

LuisV: The citizens of Jamestown are very fortunate to have restored “the Reg” downtown and it would be nice to see “the other” theatre downtown restored….the Winter Garden.

Correction: The second link should be