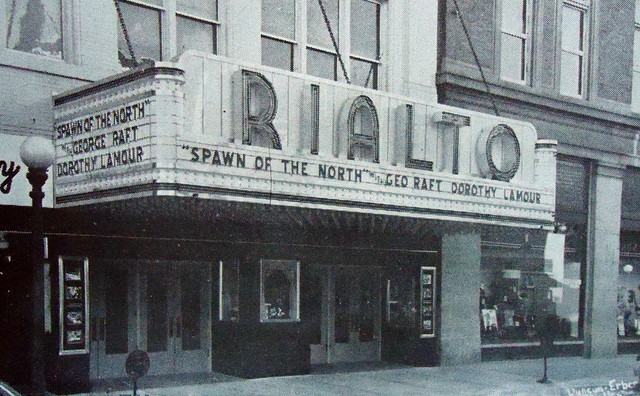 The Theatre Belvoir opened in 1915, in a turn-of-the-century building which formerly housed a store. The theatre was originally a legitimate house, seating somewhere between 850 and 900, containing two small balconies. In 1917, the name was changed to the Rialto Theatre, and a steel-and-glass marquee was added over the main entrance on Church Street.

In early-1938, the theatre closed for remodeling, thoroughly changing the appearance of the Rialto Theatre in a streamline Moderne style to the plans of architect George Ramey. One of its two balconies was taken out, and air-conditioning and a theatre organ were added. One local paper called the movie house’s new look “modernistic simplicity”. In fall of 1938, the theatre reopened with “Sing You Sinners” starring Bing Crosby.

In the late-1960’s, after decades of mostly first-run fare, the management of the Rialto Theatre switched to foreign films, which were shown for almost a decade, until the Rialto Theatre was taken over by the Kerasotes chain in 1978. Kerasotes' operation of the theatre lasted just three years, closing it in 1981.

From the early-to-mid-1980’s the theatre was leased by an organization called the Lighthouse which screened Christian movies. After this, the building sat vacant until 1993 when it was sold to a new owner who converted the former theatre space into a photography studio.

While the upper portion of the Rialto Theatre’s facade still retains much of its early-20th century appearance, the ground floor facade has been substantially altered. The building continues to be used for retail use today.

I worked at the Rialto Theatre from 1969 till it was leased to Keresotes in 1978. I was in high school and college and managed the theatre the last three years it was operated independently by the Russell family. I have been in the industry for about 30 years with such companies as General Cinema, Walt Disney, Paramount Pictures and Consolidated Theatres. I know the business and I know every inch of this theatre. I would love to see it ressurected as an art house!

Please post any additional information about this development as I would lover to follow any progress made.

Latest news from Greg Boardman (mostly about the Art but he does mention the Rialto.)

What good is being on an email newsletter list, if you don’t hear the news there first?

Many of you know that I was investigating reopening the Rialto Theatre (directly across from the Art Theatre) because my lease ends at the Art on December 30, 2009.
While I would have loved the challenge and I love large, old, single-screen theatres, unfortunately, the owners of the Rialto Theatre did not feel the time was right for them.
Other locations were explored, but none would have been ready in a timely manner.

I have sold my equipment and furnishings to a new operator, Sanford Hess, who has secured a lease with the owner of the Art Theatre, David Kraft.
It is my understanding that the new operator will be using a professional film booker to secure films.
My hope and belief is the Art Theatre will continue to provide CU with quality Independent and foreign language films.

I am proud to have taken the Art Theatre from its closed and run down condition in 1993 to the best theatre in CU today.
The lobby/concession area remodel, the picture and (especially) the sound presentation, is my design.
I have booked every film shown since reopening in June of 2003. I worked with the U of I to bring French, Latin American, and Asian film festivals to the Art Theatre.

I would like to thank all of you for your interest in quality films, your attendance, and your film suggestions.
Without your support, CU would suffer with only the multiplex offerings from the corporate giants in town.
They thought we would fail. They hoped we would fail. They did what they could to bring our failure about. But in the end, Boardman’s Art Theatre performed better than the multiplexes in some head-to-head battles.
And they don’t even come close to our attendance when they attempt to show films that truly belong at the Art.
Your support for our presentation of quality Independent films now has many film distributors calling me to see if they can book their films into the Art Theatre.
We should all be proud of that.

In addition to your support, Boardman’s Art Theatre could also not have been successful without the help of talented, honest and dedicated managers and staff over the years.
And none has been better to rely on than Yvonne Green, my present manager, and her staff.

Finally, I will miss all of the above and hearing from you. I wish that I could have been at the theatre more often, to discuss with you the many fine films you have enjoyed.
I hope you continue to support the Art Theatre. Yvonne will be staying on for some time, helping with the transition.
Smart Cards will continue to be operational into the new year.
I will send out a few more newsletters before my lease is up.

PS. I wanted to show “A Serious Man” from the Coen brothers before my lease ran out, but “An Education” may take us into “Precious."
The Coen brothers' films are some of my favorites.

Some of the letters from your marquee didn’t however…..

This video tells the history and shows vintage images of the Rialto Theatre;
View link

Here’s a video that chronicles the Rialto Theatre. The title is subjective but was also the theatre’s slogan after it was renovated in 1938. I did this for my old boss and very good friend, John Russell who turns 79 on the Fourth of July. The Russells owned and operated the theatre for most of its 70 year history.

It seems as though “Champaign’s Finest Theater” is not just the name of the video posted above, but was actually a slogan the Rialto used in its advertising.

Thanks for providing the link Chuck. Not sure why it didnt work for me…

Champaign architect George Ramey designed the 1938 rebuild of the Rialto Theatre’s interior, according to an article in the September 28 issue of The Daily Illini that year. Raney’s design sounds decidedly Streamline Modern, judging from these lines: “Modernistic simplicity is the keynote of interior decoration. The undecorated walls, completely soundproof, are lighted by blue and amber indirect lighting.”

The Rialto apparently still had an organ in 1938, as the final line of the article read thusly: “A grill concealing the organ has been held up in shipment from the east coast due to interrupted transportation and has been transhipped to reach Champaign for the opening night.”