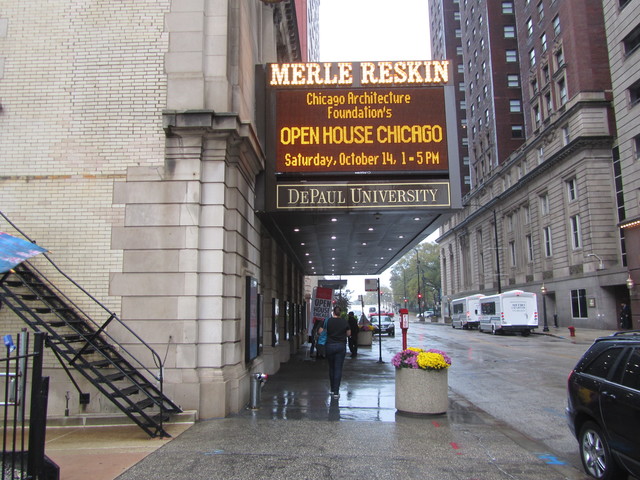 The Blackstone Theatre was opened December 31, 1910 with William H. Crane starring in the comedy play “U.S. Minster Bedloe”. It was designed as a playhouse theatre by architectural firm Marshall & Fox in a French Renaissance style. The original seating capacity was for 1,400. It also presented vaudeville, and was sometimes used as a movie theatre. Many famous performers have graced the stage over the years, including: Kathryn Hepburn, Vivien Leigh, Hume Cronyn & Jessica Tandy, Ethel Barrymore, John Barrymore, Helen Hayes, Ruth Gordon & Spencer Tracy. It was operated by the Shubert Organisation from 1948 until 1988, when it was purchased by the DePaul University for their theatre school productions, reopening March 21, 1989.

In 1992 it was renamed Merle Reskin Theatre.

And yet, if this entry is deleted, all that great research you did will go to waste. And future wannabe theatre connoisseurs perusing this site will never know that the Blackstone did indeed show at least a few movies over its long life.

Anyone want to start a new website: Legitimate Theatre Treasures?

JAlex- this matter has come up here several times in the past. It doesn’t have to be a seperate website, just a link here to a section called “Stage Treasures” or “Live Treasures” where all of these non-movie theaters and concert halls could be listed. Then this website could be a one-stop resource for all kinds of theater buildings.

Comfortably Cool – okay, it showed one movie. I don’t see the calamity with listing this theatre here. It’s certainly more of a treasure than most mall cinemas. Also, I’ve never been in the place but I’m wondering if it has, or had, a projection room? Not sure how that would have been handled back in 1910, or 1919 when the one movie was shown. I guess if just one movie was shown they must have set up a temporary projector somehow.

Somewhere, some place, sits the 1918 projector used in the Blackstone Theatre. Its probably sitting in some obscure museum or dusty attic right now.

If we could find that projector it would likely validate the Blackstone being listed on this site. Maybe it’s still in the theatre somewhere.

I think we can say that the Blackstone “was sometimes used as a movie theatre”. There’s enough evidence that has been found to substantiate “The Birth of a Race” was shown there. (Great find on the ad Comfortably Cool (posted in Photos section)) Now who wants to find other movies shown there to prove this wasn’t the only movie. There are hints that, from the depression era there may have been other movies shown there. Or is going on necessary?

It would be interesting to know what other movies played there, if any. Regardless, I agree that the evidence is sufficient to list this as a Cinema Treasure.

I visited the Merle Reskin Theatre during their OHC Open House Chicago event. I got the chance to ask about movies that were shown there. The expert they had there didn’t have much knowledge about which old movies that were shown there in the early days of the theatre. Today they use a screen set up on stage for special events like this (OHC). See Photo section for a photo of this. I was told “occasionally” they had movies. But as of right now there is no history as to what movies were shown at the theatre. During times when there were no plays being performed they would open doors to civic and fraternal organizations. Some times a movie was shown.

1916 the theatre was used for Women’s Suffrage Rally and Conference.

1925 the theatre had live broadcasts of stage performances that could be heard on Chicago-area radio station WTAS.