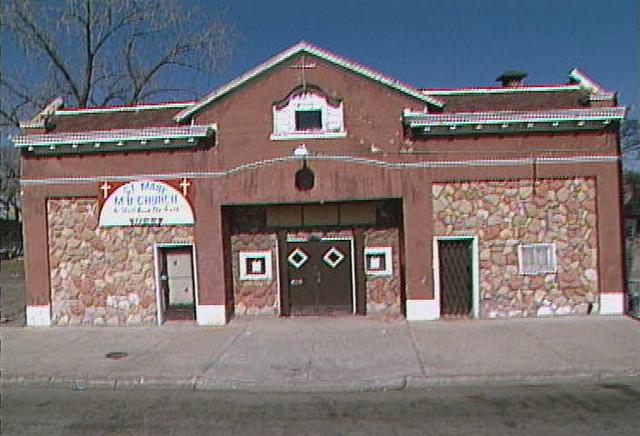 The Lynn opened in 1914, and was located in the Englewood neighborhood, on 63rd Street between Abderdeen and Carpenter Streets. This small neighborhood movie house closed in 1951, and afterward was used as a church. The former Lynn Theater has since been torn down, and a new church building built on the site.

A VERY tiny theater indeed! Last time I saw it, the place was sandwiched between a used car lot and a barbecue pit (the Pig Pen… I used to LOVE thier stuff!). The front of the building looks like it was built on the standard size lot for that area, 25' x 125'! Don’t know if the building goes all the way to the back of the lot; I’d be very surprised if it does. Location is actually in the middle of the block between Carpenter and Aberdeen. A number of church congregations have used the building since it’s closure as a theater. I seriously doubt that the theater was operating after 1953.

One more detail… the theater has an apartment on the second floor… apparently, a SMALL appartment.

The synopsis says the theater seated 300. NO WAY!!! Half that figure would be stuffing the place to the rafters!

I’ve got a photo of the Lynn Theater as it appears circa 2004. It appears that the church that now owns the place has expanded into the businesses that were on either side (no more Pig Pen Barbecue!!!), and it has been remodeled to blend them into the original structure, giving it a total frontage of 75' (as compared to the original 25'). It also appears that the 2nd floor apartment above the old theater has been removed somewhere along the way during remodeling of the building.

When the system picture upload utility is again online, I’ll add it to this entry.

From the Chicago Tribune

Lester Miller, owner of the Lynn theater, 1044 W. 63d street, last night captured a stickup man, but then almost lost his prisoner by giving him a light for a cigaret. In custody was Henry Alger, 35, of 1537 W. 63d st.

Alger had shoved a revolver into the theater cage and ordered Miller to hand over contents of the cash box. The theater owner grabbed for the gun, but Alger fled with it. Miller caught him a half block away. The stickup man said he had thrown the gun away

As he was being led to the theater, Alger asked for a light. Miller struck a match, and Alger pulled the gun from his pocket. But this time Miller took the weapon as he subdued Alger.

Alger was identified as one of two men who had taken $55 in a robbery of Irving Altman, manager of the Show Club lounge, 653 W. 63d. Later, police arrested Eugene Lippner, 33, at 1537 W. 63d. He was identified as having been with Alger in the lounge.

It looks to me like the congregation has since built a new home and torn down the old Lynn.