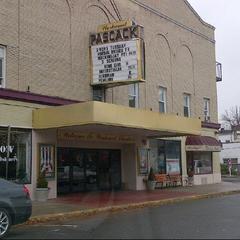 The Pascack Theatre was opened on August 30, 1928 presenting vaudeville & the movie “The Skyscraper” starring William Boyd. It is a little gem just off the main drag in Westwood, New Jersey. Unfortunately, the beauty of the theatre is hidden behind the walls of this sixplex. The Pascack Theatre was 1,275 seats including the balcony. Operated by the Skouras Theaters Corp. chain in the 1940’s, United Artists turned it into a quad on December 13, 1985.

The theatre was subsequently sold and now has six screens, two in the original orchestra, two in the balcony, and two on the original stage. The Wurlitzer Theatre Pipe Organ was removed in 1997 and relocated to the Brook Theatre in Bound Brook, New Jersey. By 2018 it had been renamed Westwood Cinema.

I haven’t been to the theater in years. I was very impressed with the improvements and upgrades the new owner made. The sound system was great! The theater was clean as well as the remodeled restrooms. The owner and employees were extremely courteous and friendly. The chairs were a better quality and more comfortable than AMC. It is nice to have a local theater in town that is comparable to the big chains.

I went to this theater once in 1989. I’m from Newark, but my mother had an art show right next door to this theater. I’d usually help her out, and when there was a theater in the neighborhood, I’d see a film to kill time till the show ended. Saw a double-feature that day: “No Holds Barred” and “Lords of the Deep.” Nice little theater.

During the brief time I lived in New Jersey (1983-1986), I have never attended this theater, and, judging from what hotwatterbottle said about the management having attitude problems, I’ll be sure to avoid going to the Pascack the next time I come back to Jersey for a visit.

But I do remember reading about an incident that happened at the Pascack in the summer of 1984: The movie “Gremlins” was supposed to open at the Pascack that July, but somebody broke into the theater and stole the prints of the film. Although I don’t remember any follow-up articles about the incident in the Bergen County Record, I’ll most likely bet the perpetrators have long since found a home behind bars.

(I saw “Gremlins” at the Route 46 Triplex in Totowa in late July 1984 and then – when it was rereleased in September 1985 – I saw it again at the Route 17 Triplex in Paramus. Both theaters are now closed, as indicated in their entries.)

The listing should be changed to Westwood Cinema, which is the current name for the multiplex. Website here 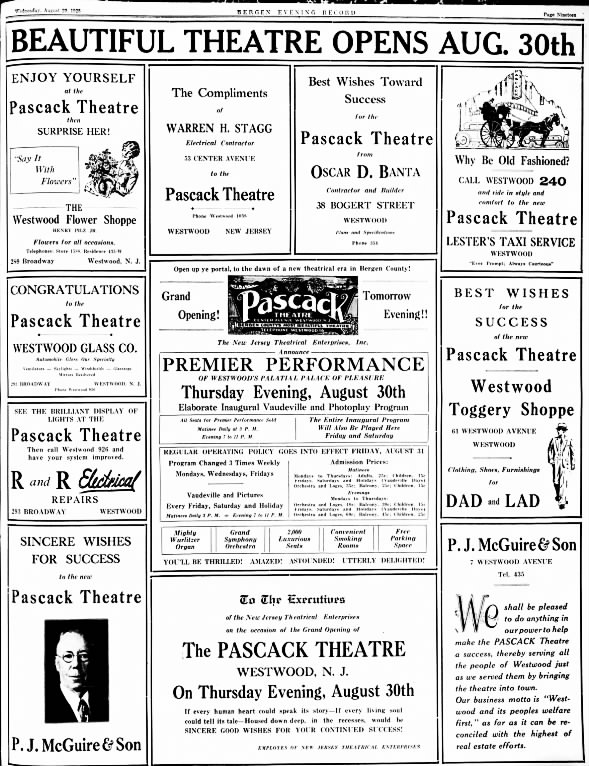 United Artists open it as a quad on December 13, 1985. Grand opening ad in photos section.

This was my boyhood theater starting with movies like PT 109 and Lady and the Tramp. Beautiful theater and nice size screen. Was never in it since it was turned into shoe boxes. Why bother? My TV is probably as large as the screens. And to have gotten rid of that organ! Vandalism.

vindanpar, I wonder if the organ survived the Floyd flood of 1999 when the Brook Theatre got flooded with 14 feet of water.