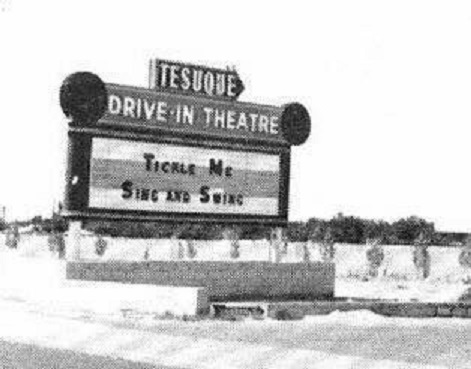 An article in the Oct. 6, 1977 Albuquerque Tribune said that the residents of the La Mesa neighborhood, with the help of the City Council, had purchased the Tesuque “at 500 Tennessee NE” to turn it into a park and community center. That became the present Mesa Verde Park.

I’m not sure of the exact closing date, but the Tesuque’s manager, Robert Millard, reported being robbed in August 1976.

The Tesuque’s first ad in the Albuquerque Journal, as far as I could find, was Aug. 7, 1949. It didn’t mention a grand opening but said it was “Albuquerque’s newest drive-in theatre”.

Historic Aerials shows a narrower field for the Tesuque in 1951, wider in 1959, then expanding to its full size by 1967.

Why the name Tesuque?

I just noticed that between 1951 and 1967 the Tesuque moved its screen from north-facing to northeast-facing. Offhand, I can’t think of another single-screen drive-in that ever moved its screen. Anybody have other examples?

A quick Google search led to a Wikipedia page about the place, the pueblo, and the literary references to Tesuque.

The 1952 Theatre Catalog shows the Tesuque with a capacity of 320, owner Cliff Butler. The 1955-56 edition includes the Tesuque Twin (cap. 850, Marlin Butler), but none of the aerial photos or topo maps show a second screen. I think someone at the catalog got it mixed up with the Terrace Twin.

Many drive-ins simply replaced or put a widescreen in front of the older screen. It appears the Tesuque took advantage of the additional space and re-positioned the new screen.

The July 16, 1949 issue of BoxOffice provided a projected opening date and the real reason for the Tesuque’s name.

“Clifford Butler’s new drive-in at Albuquerque is scheduled to open July 22. The 312-car theatre is located on the corner of Tesque (sic) street and Pennsylvania avenue on the east side of town. It will be known as the Tesque Drive-In, the second outdoor theatre in the vicinity.”

The Tesuque was a twin for a few years after its 1953 expansion. That fits with the 1955-56 Theatre Catalog calling it the Tesuque Twin, owner Marlin Butler, cap 850.

Newspaper ads from at least May 8, 1953 called it the Tesuque Twin and referred to East and West screens. In September that year, silent western star Hoot Gibson made an appearance there on a stage “erected between the two screens.” Per the Albuquerque Journal.

On Feb. 24, 1956, a wind storm “tore off a 16-by-43 foot section of the east screen at the Tesuque drive-in theater early in the afternoon. Part of it blew over the wall into the adjoining street.” Per a front-page story the next day in the Journal.

It rebuilt. The July 13, 1956 ad in the Journal had East and West screens again. But by 1957, the ads showed that the drive-in was back down to one screen.

The best address for the Tesuque is probably the address of the present-day Mesa Verde Community Center in Mesa Verde Park: 7900 Marquette Ave. NE, Albuquerque, NM 87108