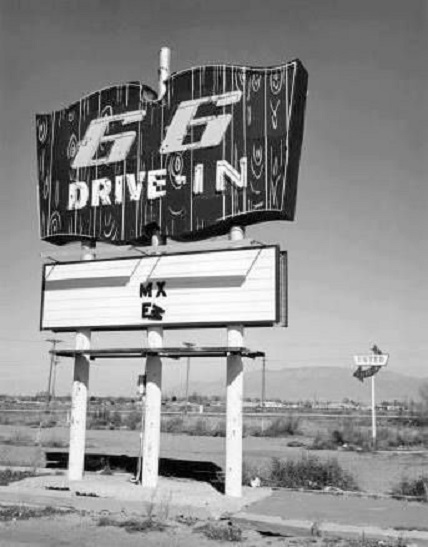 Opened on August 30, 1949 Alan Ladd in “Whispering Smith”. The 66 Drive-In was operated by Interstate Theatres Inc. of Dallas TX. when it had a capacity for 400 cars. The 66 Drive-In was operated by Albuquerque Exhibitors by 1952 when it had a 557 car capacity and 40 seats for walk-in patrons. Listed in the Film Daily Yearbook of 1956, the year it was closed. It became a midget speedway track.

Between the 66’s founding and reopening (after a few years as a micro-midget race track), the city changed its address system so the new and current address is 7019 Central NW.

Per the Albuquerque Journal of Feb. 1, 1952, that was the date when control of the 66 (and other local theaters) passed from Texas Consolidated Theaters, Inc., of Dallas to Albuqerque Exhibitors, Inc.

“Joe Barnett, Albuquerque financier and owner of much downtown property, heads the firm, Albuquerque Exhibitors. Secretary is Mario Bachechi. Others of the Bachechi family in the firm are Victor Bacheci, Carlo Bachechi, and the estate of the late Arthur Bachechi. … Theaters involved are the KiMo, Sunshine, State, Hiland, Cactus, 66 Drive-In, Chief, Rio, Yucca and Lobo.”

Robert O'Donnell had acted as GM for the Abuquerque theaters under Texas Consolidated. “George Tucker … becomes buyer and broker of motion picture firms for the company.”

When did the 66 first close? The local theater chain was sold back to Texas interests in early 1956, and that might have been when the decision was made. There were Journal ads on June 1 for the Sunset, Duke City, Tesuque, Terrace, Star and Cactus, but not the 66. An advertisement in the Journal for July 1, 1956 proclaimed: 66 Drive In Theatre CLOSED! Attend your Cactus and Star drive-ins

The site became the 66 Micro-Midget Speedway, per a May 15, 1957 article in the Tribune. The one-tenth mile racing oval was fronted by 4800 capacity grandstands to the north and south. Opening Day was set for June 2. Historic Aerials shows the track in place in 1959.

The 66 reopened in July 1964. The official Grand Opening was July 24, per an article that day in the Tribune: “Total remodeling cost was about $75,000. It included a new sign, screen, projection building with snack bar and rest rooms, resurfacing of the parking area and new auto speaker sound equipment.”

Historic Aerials shows the site restored to normal drive-in mode in 1967 & 1972, and the concession building and ramps still visible in 1991. Topo maps show a drive-in there through 1985.

When did the 66 finally close? Good question! Obviously before the screen-missing photo from 1991. It was still advertising (adults only) through June 26, 1983, the last 66 ad I could find in the Journal. There were other adult theater ads after that date, so it’s possible that the 66 closed that summer.

ALBUQUERQUE – In-car heaters are among features of the new 66 Drive-In recently opened here by Albuquerque Theatres. With a capacity of 550 cars, the new drive-in has a snack bar and an adjoining patio from which patrons may watch the picture on the screen. George Tucker is city manager for the operating company, and H. H. Schulze is manager of the drive-in.

Boxoffice, July 30, 1962: “Albuquerque Theatres … is going back into the drive-in business, with announcement that it plans to remodel two closer outdoor theatres. The local circuit, a part of Frontier Theatres of Dallas, will reopen the Star Drive-In here in late August and the 66 Drive-In early next spring. The circuit has been out of the drive-in business for about four years. … The 66 Drive-In, located on the famed highway just west of the city, has been closed about six years. In the intervening years it has been used as airport runway. (Resident manager Louis) Gasparini said a company survey revealed the population increase warranted the reopening. About $35,000 will be spent to rehabilitate the outdoor property. The work is slated to start early next year for an April opening.”

Boxoffice, June 1, 1964: “The 66 Drive-In, situated on U.S. 66 west of the city, is being renovated for a mid-July opening. It has been the site of midget car racing in recent years and hasn’t shown movies in ten years. Louie Avolio, Frontier Theatres, said the new 66 will accommodate 600 cars.”

I didn’t know there used to be an airport near the 66.

Boxoffice, Sept. 11, 1948: “Construction was slated to start in mid-September on a drive-in to be built … by Albuquerque Theatres circuit, according to Manager George Tucker. The new ozoner will be located near the airport road and will accommodate 750 cars. Opening is planned for next spring.”

Boxoffice, Feb. 5, 1949: “George L. Tucker, city manager for Albuquerque Theatre, (announced the start of contruction of an indoor theater) in addition to recently announced plans for construction of the new 66 Drive-In, a 750 to 1,000-car situation to be built at the entrance to the Cutter-Carr airport.”

There’s more information about the long-gone Cutter-Carr airport, sometimes known as the West Mesa airport, an eight-pointed star of unpaved runways just north of the 66’s viewing field, on Wikipedia.

As noted above, the July 30, 1962 issue of Boxoffice said that while the 66 was closed, “it has been used as airport runway.”

I was reminded of that airport stuff because a better address these days for the old 66 site is 221 Airport Drive NW. That’s where the Labatt Food Service distribution center sits as I type.