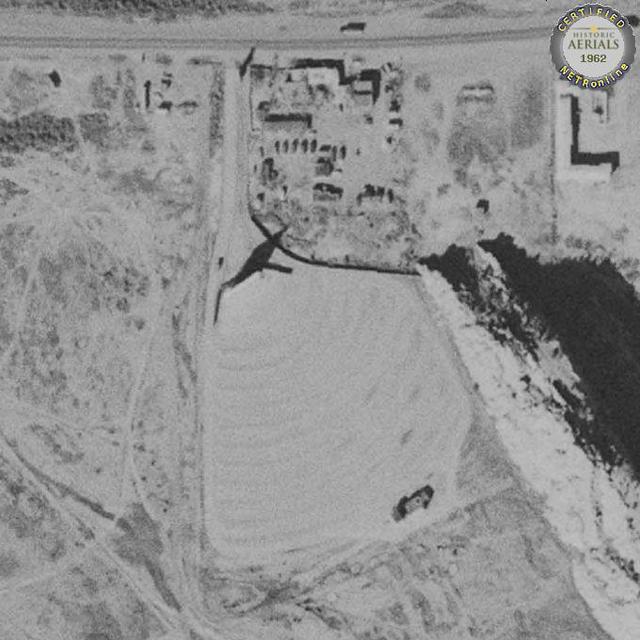 Located on the southeast corner of Aztec Avenue & Basilio Drive. The Zuni Drive-In was opened June 4, 1957 with George Montgomery in “Canyon River”. Operated by Frontier Theatres, Inc and operated by them until 1967.

Acquired by Commonwealth Theatres in 1967 and closed by them in 1985.

The drive-in was located on the SE corner of Aztec Ave & Basilio Dr, Gallup, NM 87301, on the east side of town.

Today, the property is mostly empty and you can still see the ramps.

Why was it called Zuni?

Launched June 4, 1957 with the film, “Canyon River”, the theatre shares its name with the Zuni Highway itself ultimately named after the Zuni people.

Photos of the site at Historic Aerials verify that the drive-in existed there in 1962-1981. The next photo, 1997, shows that by then the elementary school lot had already carved out the south side of the drive-in viewing area.

The higher capacity number came from a time when a drive-in operator knew exactly how many speakers he had to maintain. The 1981 photo still showed the full-sized viewing area, so it’s possible that Commonwealth understated it.

I visited the site last week and uploaded a photo. A dozen wooden screen support stumps are still there with a few metal pole stubs near the front and the remnants of a wooden fence along the north side. The ramps are visible but overgrown.

What year did the Zuni close? A list of Commonwealth managers in the July 28, 1980 issue of Boxoffice included Clinton McKinley at the Zuni, and a 1981 aerial photo showed the drive-in intact.

Commonwealth continued to include it in its Motion Picture Almanac circuit list entry (more reliable than the drive-in list) through the 1985 edition, dropping it in 1986. Since the MPA was published around the beginning of the stated year, that suggests that the Zuni may have been active in 1984.