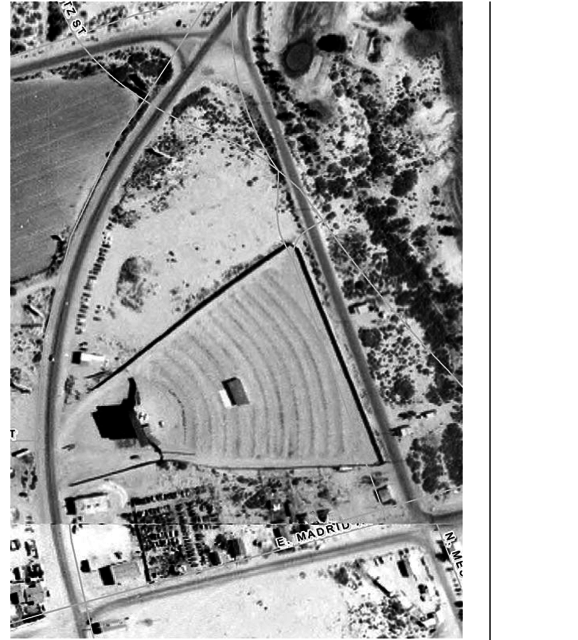 A closer address is 2603 N Main Street, Las Cruces, NM. This address lines up with the old entrance which is now the entrance to a shopping plaza.

The drive-in was gone by 1972 and nothing remains today. About the only indication that a drive-in was at that location is the fence behind Century 21 which runs in the same direction as the northern fence of the drive-in.

Boxoffice, Nov. 14, 1953: “Las Cruces, N.M. – U. A. Kane, owner of the Rocket Drive-In here, had a free quail dinner recently … Kane has an apartment under the screen tower and early one morning he heard a noise which sounded as if someone had hit the tower with several large rocks. Upon investigating Kane found eight dead quail. They had broken their necks by flying into the tower.”

U. A. Kane bought a display ad in the Oct. 23, 1954 issue of Boxoffice selling a miniature train “with two hundred miles on the speedometer”. The package included 750 feet of rail “like new”.

Boxoffice, March 28, 1966: “U. A. Kane has closed and dismantled the Rocket Drive-In, Las Cruces, N.M., and will concentrate on the operation of the twin screen Fiesta Drive-In”