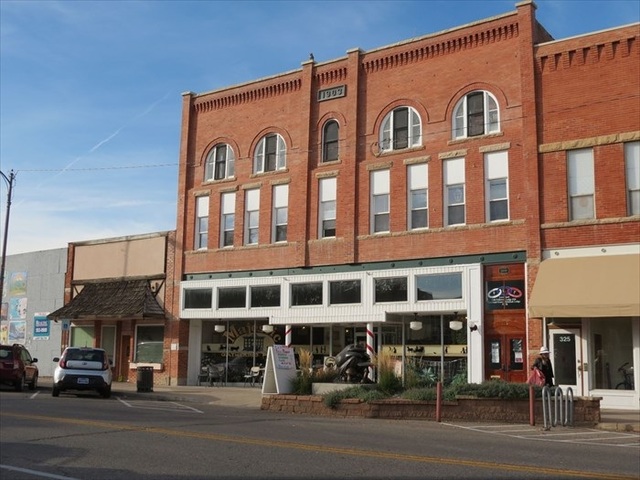 Several Colorado newspapers carried this story: “The handsome new opera house at Loveland was opened on the night of October 4, 1903, the play being "On the Hills of California”. The seating capacity is about 900". The 1904 City Directory lists the opera house as being at 317-323 4th Street. It was renamed New Loveland Theatre. It was renamed Majestic Theatre by 1911, Loveland’s main silent-ere motion picture theatre.. The first floor has been commercial space with many tenants, the most enduring having been J. C. Penny from about 1914 to 1959.

Home of the Loveland Lodge of the I.O.O.F, at 319 4th Street. Currently being renovated to restore the facade to its original appearance. The auditorium is on the second floor; the third story windows are in the balcony level.

Many thanks to Operapronto for the above history.

In its early years this house was known as the New Loveland Theatre, the name under which it is listed in both Julius Cahn’s guides and Henry’s Official Western Theatrical Guide. The name Majestic Theatre was in use by 1911, the year History of Larimer County, Colorado, by Ansel Watrous, was published by The Courier Printing & Publishing Company of Fort Collins. Watrous quotes this information from John N. Gordon, secretary of the Loveland Chamber of Commerce:

“The first public place of amusement, known as the Bartholf Opera House, was built and opened in 1884 and it is still used for that purpose. The new Loveland theatre was built in 1903 and is known as the Majestic Theatre.”