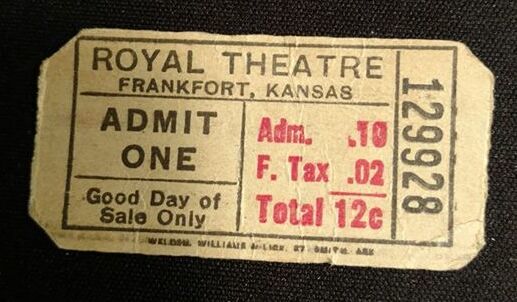 The Royal Theatre launched March 22, 1918 by William H. Hardman with Mae Marsh in “Polly of the Circus”. Hardman had run the Airdome in the summer of 1917 before purchasing an existing stone building from the State Bank in December of 1917. Hardman converted to sound on April 15, 1929. He ran the theatre until his death in 1947 with the family continuing the theatre thereafter. The Royal Theatre was still open in 1957, but later closed for movies and became a special events venue. It was closed in 1970. In 1978 it was converted into an antiques store.

According To The Frankfort Index, I Can Find Listings At Dated Throughout The 1960’s In Which In 1965, The Royal Theatre I Believe Didn’t Demonstrate Mainly Movies In The First Place, But Maybe Was Used For Special Events Only. The Royal Theatre Ended Up Closing In 1970. 8 Years Later On April 12th, 1978, Mr. Kennedy And Mrs. Paul Opened Back Up The Royal Theatre As An Antique Shop Called “Royal Antiques”.