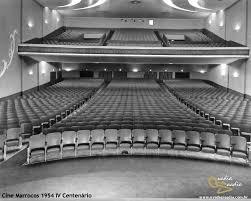 Located in the Cinelandia district of the city centre inside a 12 storey building. The 2,000-seat Cine Marrocos was opened on 24th January 1951 with Orson Welles in “Black Magic” (Memorias de um Magico). It was a luxurious cinema seating in orchestra, balcony and upper balcony levels. Interior decorations were by interiors designers Jacques Monet and Nizet, and featured painted Morrocan scenes on the lower parts of the auditorium side-walls. By 1954 the auditorium had been remodeled with the removal of the upper balcony. In 1954 it was the host to the International Film Festival of Brazil. In 1972 it went over to screening adult movies and a second screen was added.

It had closed by October 2013 when the building was invaded by 600 homeless families who occupied the entire building as an illegal squat. They were removed from the building by police in October 2016. In 2017 the city have proposals to restore the cinema as a live theatre.