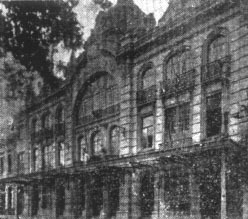 Located in the city centre on the south side of Placa da Republica (Avenida Ipiranga). This was the original Cine Republica of the city. It was opened in 1921. It was a luxurious large cinema which catered for the aristocracy of Sao Paulo. However it was short lived and in 1929 after being equipped with a Vitaphone sound system to screen Al Jolson in “The Jazz Singer”, it was converted into a skating rink. The building was demolished many years ago.

A new Cine Republic was built on the north side of the Placa da Republic in 1952 (since demolished) and in 2017 the currently operating Cine Republic (an adult cinema) was originally the Cine Central.