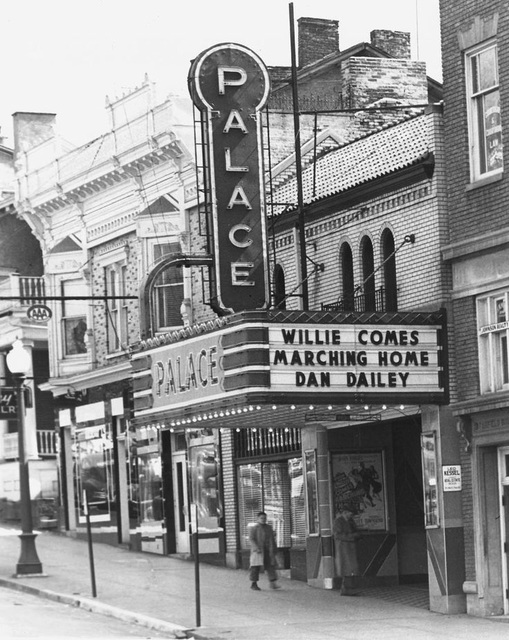 Holding its formal opening on March 14, 1929, the Palace Theatre was Lancaster’s largest and most ornate theatre. It was designed in the Spanish style by Columbus architect Harry C. Holbrook. It was equipped with a Moller theatre organ. One of the partners in the enterprise, Leo Kessel, later operated the Broad Theatre as well.

The Palace Theatre was in operation at least into the 1950’s. It was demolished in the early-1960’s.

The Palace actually stood across the street from the Fairfield Federal Bank (which is pictured above). It was demolished and replaced with a parking lot around 1960.

Ah! Great photo above of the Palace on Main Hill. Ignore my comment above about the bank photo.

The Palace originally had a Möller theater organ, but I’ve been unable to find any details about it. The organ was later moved to Lancaster City Hall. The City of Lancaster has since donated the instrument to the Victoria Opera House in the village of Baltimore, Ohio, where it is awaiting restoration.

Views at Historic Aerials show that the Palace was still standing in 1960, but had been demolished by 1970. The large auditorium covered what is now the parking lot behind both the site of the demolished theater entrance building and the adjacent three-story building that is tagged on the Google Maps satellite view as the Columbus Dispatch News Bureau.

A newspaper report about the opening of the Palace gave its seating capacity as 1,300, but I suspect that was typical exaggeration. I’ve seen other sources claiming 1,100, which could certainly have been accommodated in the space the auditorium occupied. I’m pretty sure it had more than the one seat we currently list for it in the header (which must have been my mistake when I submitted the theater.)

I saw the theatre being demolished, which had to be sometime between 1960 and 1962. I know a lot of people were upset. According to the Film Daily Yearbook 1939, the seating capacity was listed at 986.

Circa 1929 photo with original marquee added. 1938 photo added with art deco marquee too.