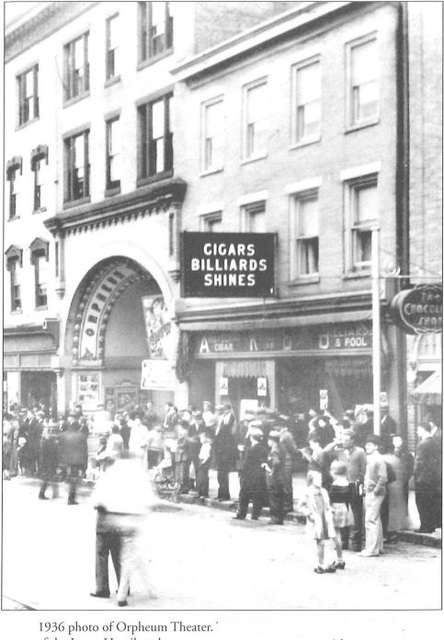 The Orpheum Theatre opened with a soft launch on August 23, 1909 during Carlisle’s “Old Home Week” with temporary seating. The official grand opening with fixed seating came on October 21, 1909 with a combination of vaudeville and filmed entertainment. The Comerford Circuit, which had already purchased the Strand Theatre, bought the Orpheum Theatre 1928 and remodeled it a year later.

On January 13, 1930, the Orpheum Theatre was equipped for talkies. In August of 1931, the theatre was remodeled again and equipped with a superior Western Electric sound system. With the Orpheum Theatre’s 30-year lease ending, the Comerford Circuit planned a larger and more modern theatre across the street.

With the new Comerford Theatre launching May 11, 1939, the circuit closed the Orpheum Theatre. It ended with “One Third of A Nation” on May 9, 1939. The theatre had sporadic live events until a fire - which started at a neighboring restaurant on November 29, 1939 - caused extensive damage to the Orpheum Theatre. The theatre seats and pipe organ were offered to the public shortly thereafter at a salvage sale. The building was demolished in June of 1940. The movie posters were likely saved as a local yard sale advertised in 1994 offered up the Orpheum Theatre’s movie posters.