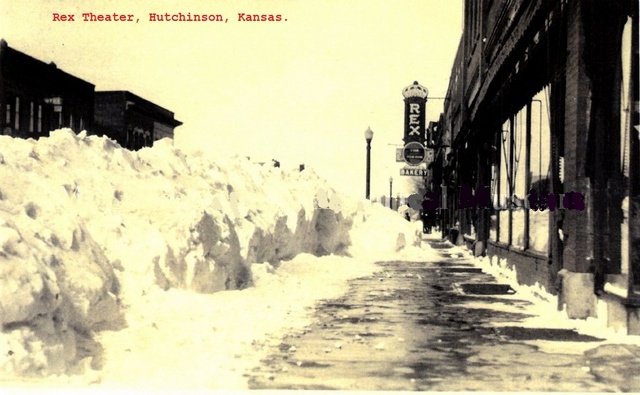 The Elite Theatre was first mentioned in the Hutchinson News October 25, 1907, advertising for a young lady or gentleman to sing illustrated songs: Must be of good character; No others need apply. A description of Hutchinson theatres in 1908, which included the Lyric Theatre and Home Theatres, noted the Elite Theatre had 350 seats.

On November 21, 1911, the Hutchinson News reported there were four theatres in town: The Elite Theatre and Pearl Theatre, owned by E.W. Martin; the Majestic Theatre, owned by C.B, Yost; the Magic Theatre owned by G.L Hill who was planning another at 204 North Main Street.

Fred Savage bought the theatre and remodeled it with a new stage, seats and motion picture machine and reopened it on February 27, 1915 as the Rex Theatre. In November 1916 the Rex Theatre changed hands again when Mr. Savage sold the theater to Carl Bornschein.

The Rex Theatre dropped out of the listings in February 1918, leaving Mr. Savage’s Iris Theatre and Deluxe Theatre and owned by others, the Home Theatre and Royal Theatre.

According to Sanborn Maps 1915, the location today would be the site most recently occupied by Mayfield and Sons. Coincidence or not, in 1942 Mayfield Music was advertised at this address.