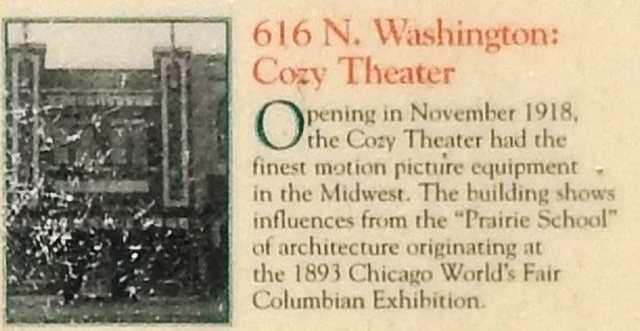 Located on N. Washington Street, the building housing the Cozy Theater first dates to the 1870’s and originally housed retail businesses until 1907 when the structure was remodeled as the Aurora Theater. It was remodeled again reopening in November 1918, with a new Prairie-style façade, as the Cozy Theater, a vaudeville and movie house. It was closed in 1928. It reopened in 1941 and finally closed by 1949.

The theater building has since housed several retail businesses, and is currently home to a nail salon and spa. The name “COZY” is still clearly inscribed in large letters on the façade of the building.

The January 22, 1908, issue of The Junction City Union said that the tinners who had been putting the decorative finishes on the new Aurora Theatre had moved on to Topeka to work on a theater of the same name there.

I’ve seen ads for both the Aurora and the Cozy in the Union as early as May, 1913, (the original Cozy most likely opened on May 10, and was at 625 N. Washington) and continuing into 1917. The Aurora often featured live events during this period, but the Cozy ran movies most of the time, though it too had live theater sometimes.

The town also had an Airdome, operated during the summer months. In 1914 the Airdome was taken over from the Aurora Theatre by the operators of the Cozy, according to the April 9 issue of the Union.

The October 16, 1918, issue of the Union had an article about the rebuilt Cozy Theatre, the opening of which had been delayed by a quarantine, probably imposed due to the Spanish Influenza epidemic. The Aurora had been renamed the Cozy in 1917 (change noted in the August 2 issue of the Union), around the time the new Columbia Theatre was opened.

Junction City had an earlier movie house, the Lyric Theatre, opened in March, 1907, at 603 N. Washington, but it appears to have closed not long after the first Cozy opened.