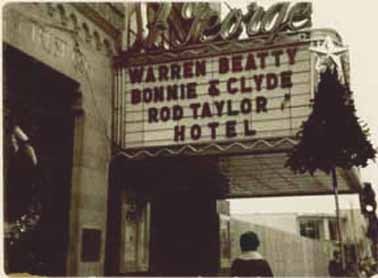 Many of the ads on that page are for the Paramount Theatre. Was this another name for the St. George, or a different theatre?

Same theatre, the name changed for a short time. I haven’t looked at enough microfilm to get the exact dates.

The MGM Theatre Photograph and Report form for the St. George has a photo taken in 1941. The rather narrow entrance is 2-plus stories high and has a rectangular marquee. The front has two lines with white letters on black background. Movies are “Sleepers West” and “The Great Dictator”. The Report states that the theatre is on Concord St. and has beeen playing MGM product for over 15 years. The house is in “DeLuxe” condition. There are 772 seats on the main floor, and 546 in the balcony, total: 1318 seats.

The only interior photo of the St. George I can find, is the one I showed on my web page devoted to the theatre, linked by Lost Memory where the photos and ads are, above. It came from the large book titled “American Theatres of Today.”

Thank you for the compliment. I don’t know when the marquee was installed, but they had one by 1940. I have a picture taken in 1940, which shows it.

The St. George in Framingham is listed in the 1927 Film Daily Yearbook as having 650 seats and open 7 days/week. That seat count doesn’t seem right.

The St. George Theatre had the same address as the Princess Theatre, 79 Concord Street. So I assume they were the same place. I posted a photo of the Princess on a vintage postcard.

The photo above shows the closing program. I was at the final screening, BONNIE & CLYDE. Sad day.

Multiple sources available on the Internet agree that the Princess Theatre opened in 1908, and also agree that it was demolished in 1917. This does seem likely. George A. Giles had control of the Princess prior to 1917, the year he took over operation of the larger Gorman Theatre and first announced plans to build an even larger house in Framingham, noted in the January 6 issue of The Moving Picture World.

Although Giles' plans for a new house at Framingham did not come to fruition until 1921, I’ve found no references to the Princess in trade journal articles about Giles after November, 1917, though there are several to his other theaters, including the Gorman.

While the buildings of small theaters such as the Princess were sometimes incorporated as entrances to new auditoriums built behind them, the frontage of the St. George building was broader, and the width of its entrance narrower, than the Princess building. This really looks like a case of demolition and replacement rather than remodeling and incorporation of an earlier structure. The Princess should probably have its own page.