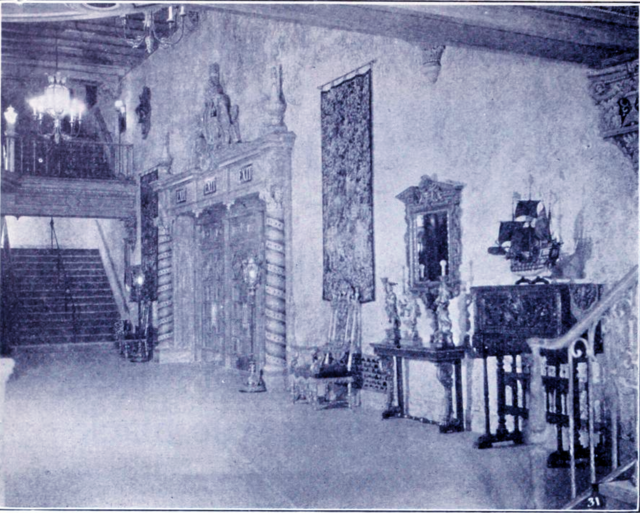 On November 18, 1926, the Venetian Theater – located at 1427 E. Pine Street on Seattle’s Capitol Hill – opens its doors to patrons. One of Seattle’s largest and most impressive neighborhood movie houses at the time, the theater represents an investment of some $150,000. The venue is owned and operated by Sam Gargano (sometimes referred to as “Joe” Gargano in the motion picture trade press).

Seating more than 800, the Venetian Theater was not only equipped for pictures but also for small stage shows before each screening. In addition, the house boasted large Wurlitzer organ (operated on opening night by organist Grant Brown) that provided musical accompaniment for the silent films shown at that time.

The Venetian Theater’s opening night attraction was the Douglas MacLean (1890-1967) comedy “Hold That Lion” (Paramount, 1926), the story of a lovesick young man who follows his flame (and her father) on a trip around the globe. In addition to the feature, a short comedy, newsreel, and four vaudeville acts rounded out the bill. “Hold That Lion” was a timely selection, given that MacLean himself had visited Seattle on a promotional tour the previous month (“Seattle”).

The Venetian Theater was a second-run movie theater, as were many of the Seattle’s neighborhood venues. Second-run theaters typically played movies that had already proved popular at the city’s larger downtown theaters, although they occasionally secured first-run showings of smaller releases. (“Hold That Lion”, for instance, had just finished a run at John Hamrick’s [1876-1956] Egyptian Theater in the University District shortly before it debuted at the Venetian Theater.) The house’s policy was to present four bill changes a week – following a ‘long’ three-day engagement of “Hold That Lion”, “Aloma of the South Seas” (Paramount, 1926) was screened beginning November 21st, followed by “Poker Faces” (Universal, 1926) beginning November 23rd.

Because the Venetian Theater was a neighborhood theater, it did not garner the publicity heaped upon similar downtown openings. Nonetheless, the Seattle Post-Intelligencer felt that the house “represents the last word in luxury of appointments and in equipment” (“New Venetian Theatre Opens”), and the Star observed that “The draperies and decorations are interesting and the program was one that pleased capacity crowds” (“New Theater at 15th and Pine”).

The Venetian Theater would continue to serve movie patrons in Seattle’s Capitol Hill neighborhood until December 31, 1958, when it closed for good. The venue was razed in mid-1959 to make way for a supermarket. -Eric L. Flom - historylink.org

The supermarket that replaced the Venetian Theatre has itself been replaced by a six-story condominium building with retail space on the ground floor. Street view should be set to the southwest corner of the intersection.