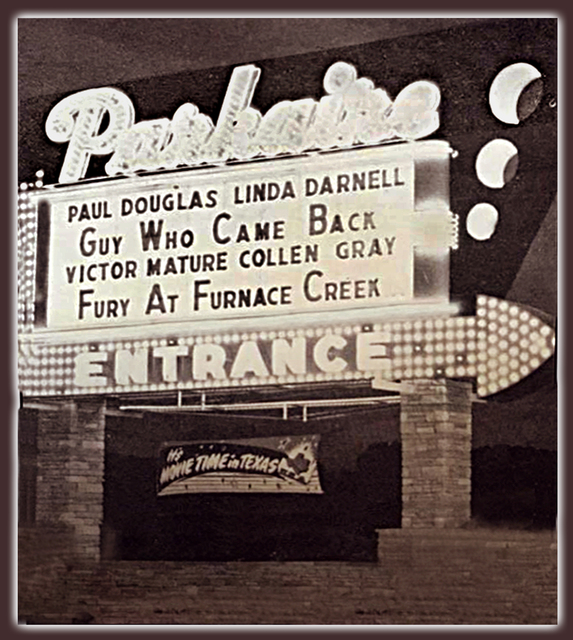 The Parkaire Drive-In had a huge free standing marquee and sign that was brighty lighted with neon tubing and numerous bulbs. It was opened March 15, 1951 with Abbott & Costello “In the Foreign Legion”. It was listed with a capacity for 535 cars and was operated by the Parkaire Drive-In Theatre Corp. By 1952 it was operated by L.C. Tidball (the address given in Theatre Catalog was 2403 N. Main Street, which is the address for the New Isis Theatre - possibly same owner). It was closed in 1976. It was levelled long ago and is now pretty much forgotten.

This opened on March 15th, 1951. Grand opening ad in the photo section.

This is the first I’ve heard of this brand of shenanigans. Did this really happen elsewhere, or was it a Fort Worth thing?

Billboard, March 6, 1954: “A new menace has come to plague Texas drive-in operators. Its still the teen-agers who before made off with speakers. Now, according to Earl Powell, manager of Parkaire Drive-In, Fort Worth, the vogue is for youngsters to form a motorcade of about 20 cars and make a lightning-like charge on the drive-in. Just after the last show starts and theater personnel have left their posts, the motorcade pounces down on the drive-in and to speed around the theater, driving bumper-to-bumper, and spraying gravel into the windshields of cars viewing the film while keeping their horns blowing.”