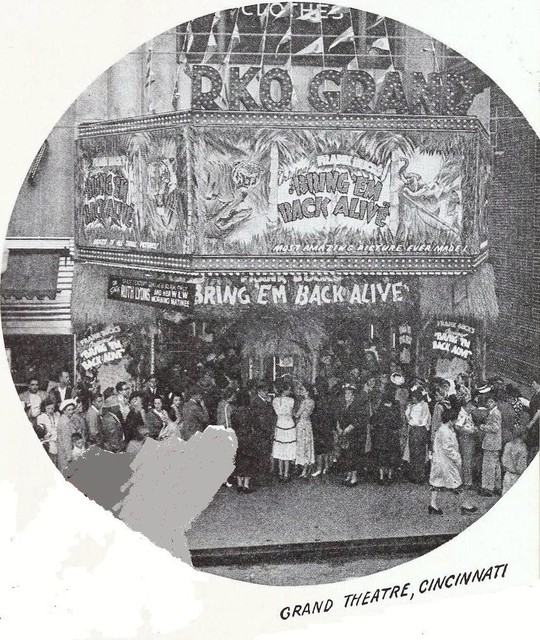 The RKO Grand Theatre was located in downtown Cincinnati. It opened on August 22, 1940. Not a fancy house but it ran some great first run films. I saw “Rosemary’s Baby” and “The Graduate” there and even some less than greats such as “Myra Breckenridge”, “Barbarella” and “Putney Swoop”. The Grand Theatre was demolished in 1980.

The Grand Theatre was built on the original site of the Grand Opera House. It was operated by RKO for 32 years and is listed as the RKO Grand Theatre in the Film Daily Yearbook,1950.

This is undated, but appears to be from the early twenties:
http://tinyurl.com/mt69d

The architect for the 1940 RKO Grand Theater was Drew Eberson, son of the famous John Eberson.

The Grand theater was three seperate structures. The Grand on this page is the RKO GRAND moviehouse from 1939 lasting until it was torndown in 1980.

The original Grand Th. (legit) burned on the same day that Queen Victoria died, so the Cincinnati papers shared the front page with Queen Vicky and the Grand Th. fire.

Also Playing for you Ohio moviegoers at the GRAND was Sidney Poitier in UPTOWN,SATURDAY NIGHT. They even ran a late show on this movie at 11:40 pm. Rated PG. This was part of the MID STATES CINEMAS inAugust 9 1974.

History of theatre at http://www.newspapers.com/clip/2524074/rko_grand_cincinnati_article/

Architects John Garner and Frederick W. Garber of Cincinnati dramatically changed the course of the Grand from its previous incarnation at 525 Vine in downtown. Thick carpeting and no-frills streamlined approach though complimented with murals by local artist Andrew Helwig led to a less than memorable look. RKO promoted the Grand’s low price point for its theater’s launch on August 22, 1940 with “I Love You Again” following an invitational preview that had occurred two days prior.

The theatre went widescreen and stereo transforming to a first-run, road show picture house. Probably the most hyped event was the playing of Cleopatra opening on June 26, 1963. 25-year lease completed, RKO left the building in 1965. Cincinnati Theater took on the fading Grand followed by the Mid-States Theatre Circuit in 1971.

Mid-States wrang some money from the theater by switching to martial arts films including, “Kung Fu Christmas.” However, reports suggested that the theater’s condition worsened as patrons practiced their martial arts moves on doors and walls. The theater switched its policy to discount, double-feature sub-runs. The Grand went out quietly with a double feature of “Conrack” and “Claudine” on March 25, 1975. The property was rebranded as the Gateway Federal Building though retaining the theater marquee and many elements.

The marquee flashed one last attractor in 1980 used as an election ad by the George Bush for President campaign that ultimately failed that year. The location conducted a salvage sale in March of 1983 prior to demolition that year to be replaced by the 525 Vine Building.

Could I have seen a more diverse selection of movies at one theater than at the Grand. The first movie I saw there was around 1955 when my mother took my sister and I to see a revival of “Wizard of Oz.” The next year the awful Davey Crockett fad came around and a friend and I got in Davey drag to see Fess Parker at the Grand. I didn’t go back til I was eleven or twelve, the first day “Psycho” opened and I broke my neck to see it right away. When “La Dolce Vita” opened at the Grand (instead of at one of the “art houses” like the Esquire or Guild) I darkened the peach fuzz over my upper lip so I’d look old enough to get in to see it. Same for “Rocco and His Brothers” and “Lolita.” I wish I’d known the lady manager of the Grand, because she would see me in the lobby and discuss the movie that was playing. She knew I wasn’t old enough to get in, but she liked me.