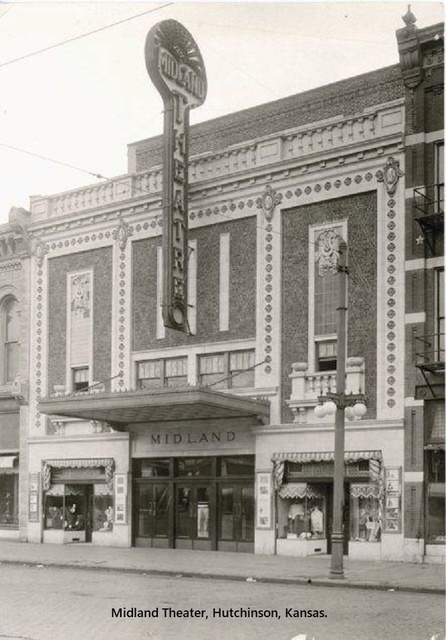 The Midland Theatre opened June 21, 1920, by the Midland Theatre & Reality Co., featuring a $20,000 Austin pipe organ and a “Scientifically perfect cooling and ventilating system”. The other theaters in town were the Iris Theatre, DeLuxe Theatre, Liberty Theatre, and Royal Theatre.

While the Midland Theatre was starting construction the previous November, the Midland Company purchased the Royal Theatre and would go on to run all of the theaters in Hutchinson until being bought by Fox Midwest Theatres in September 1929. The Midland Theatre’s first Vitaphone talkie was March 11, 1929, with Conrad Nagel in “Caught in the Fog”.

The Hutchinson news reported architect Frederick E. McIlvain designed the theatre with over 1,300 seats, which included a balcony seating 400.

Wooten’s immediate plans involved installing a new screen and show its first CinemaScope movie Tyrone Power in “King of the Khyber Rifles”, which opened on May 28, 1954. A more extensive remodeling was carried out later.

The Midland Theatre closed January 15, 1958. On May 2, 1958, The Hutchinson News reported that Wooten’s five drive-in theaters in Kansas would be joining Commonwealth Theatres and he would remain as district manager.