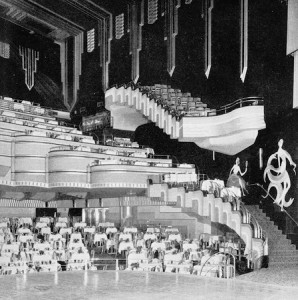 Located on the southeast corner of 7th Avenue and W. 50th Street (from 1927 across from the famed Roxy Theatre). The first Earl Carroll Theatre was opened February 25, 1922 with a Russian melodrama “Bavu” which had William Powell in its cast. It ran for only 25 performances. After a couple of other flops, it had its first hit “The Gingham Girl” in August 1922. This was followed by the first edition of “Earl Carroll Vanities” (a rival to Florenz Ziegfeld’s “Follies”). The theatre was designed by architect George W. Keister and had 1,026 seats in orchestra and a single balcony levels (there were no boxes). Various editions of Earl Carroll Vanities ran for several years, and the final production at the theatre was the second of “Earl Carroll’s Sketchbook” which ran for 400 performances in 1929. The Depression began to hit and the theatre was leased to Radio Pictures who equipped the theatre with a RCA sound system and held the World Premiere of “Rio Rita” starring Bebe Daniels on October 6, 1929. After several more movies (and World Premieres), the first Earl Carroll Theatre was closed with the movie “Puttin' on the Ritz” starring Harry Richman on March 3, 1930. The interior was gutted and a new enlarged Earl Carroll Theatre was built using additional land on W. 49th Street & W. 50th Street.

The second Earl Carroll Theatre was again designed by architect George W. Keister with architect Joseph Babolnay in a splendid Art Deco style of black velvet covered walls, relieved with gold & silver aluminium streaks and flame-shaded terra-cotta. Seating was provided for 3,000, with 1,500 in the orchestra, 1,300 in the balcony and 200 in boxes. There were two elevator platforms on the stage. It opened on August 27, 1931 with “Earl Carroll’s Vanities of 1931”. The lavish production never recovered its costs, and within six months Earl Carroll lost control of the theatre.

It was taken over by his rival Florenz Ziegfeld Jr. and renamed Casino Theatre, opening with a revival of his hit show “Show Boat” starring Paul Robson which ran for 181 performances from March 19, 1932. Ziegfeld died during the summer of 1932 and the show closed. The Casino Theatre was then taken over by George White. The theatre only ran for four years, closing in 1933 with a vaudeville show “Casino Varieties” with a top ticket price of $1.50.

It was taken over by Clifford Fischer, a former agent to the Orpheum Circuit and noted theatre architect Thomas W. Lamb was employed to make alterations to convert the theatre into a dinner-theatre. The theatre seating was removed and the balcony and orchestra floors were tiered, upon which tables & chairs were placed. There was also a dance floor. It reopened in December 1934 as the French Casino. Later renamed International Casino, Billy Rose took over in 1936 and after further alterations when the theatre was redecorated in a Latin style and the stage extended out from the proscenium, it was reopened on January 10, 1938 renamed Casa Manana. This was not a success even at an admission of $2.50 for dinner, dancing and the show, and the building was put up ‘For Lease’ by the end of 1938.

Sadly, there were no takers, and most of the interior was stripped out and the building became a Whelan’s Drug Store and later a Woolworth’s store. The five-storey office building above Woolworths had been demolished. But behind false walls & ceilings, there were still some hidden remnants of the former theatre.

In 1990, Woolworth’s closed and the building was demolished.

Glad to see a new listing here, but…

It seemed to show movies for only a short time in late 1929.

And the famed impresario’s name was Florenz Ziegfeld Jr.

The Woolworth’s had two entrances, one on Seventh Avenue, and the other on West 50th Street, directly across from the Roxy (until the latter’s demolition).

“Ziggy” was able to rename the theater the “Casino” in 1932 because the original Casino Theatre down on the east side of Broadway at 39th Street (opened in the 1880s with a Moorish motif) was demolished in 1930. That theater was originally an “upstairs house”, had a summer roof garden and hosted many musical shows. I don’t think that movies were ever shown there.