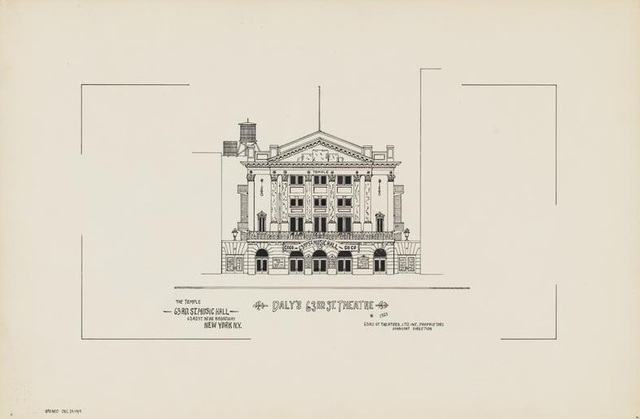 Originally built for actor Butler Davenport to be known as Davenport’s Theatre. Construction began to the plans of architect Thomas W. Lamb in 1909. Due to financial difficulties, only the stage and balcony had been constructed when work was halted. The project was taken over in 1914 by the People’s Pulpit Association and the International Bible Student’s Association and was completed to the plans of architect Erwin Rossbach. It opened as the 63rd Street Music Hall on December 25, 1914 with a policy of movies for children. This policy was a flop and the theatre was closed after only operating for ten days.

It was taken over by producer John Cort who reopened it as Cort’s 63rd Street Theatre on 31st January 1921 with the play “Mixed Marriage”. In May 1921 a musical with a black cast named “Shuffle Along” opened at the renamed 63rd Street Music Hall. The musical was a smash hit playing for 504 performances and starred Florence Mills and Josephine Baker.

The theatre was redecorated in 1923 and was renamed Daley’s 63rd Street Theatre. It attracted stars such as Antoinette Perry, Basil Rathbone and Mae West to appear in various productions. In 1928 another black musical “Keep Shuffling” was a hit show starring Fats Waller. It was briefly renamed Coburn’s 63rd Street Theatre in November 1928 when Mr. & Mrs. Charles Coburn presented “The Yellow Jacket” which ran for ten weeks.

In 1932 it became the Recital Theatre, then the Park Lane Theatre and by the end of 1934 it was Gilmore’s 63rd Street Theatre hosting revivals. The Federal Theatre Project took over in 1936 and it was renamed Experimental Theatre. They moved out in 1937 and the Artef Players moved in. In 1938 it was again the Daly’s 63rd Street Theatre. Unfortunately it remained ‘dark’ until Alexander H. Cohen leased the theatre which reopened with “Ghost for Sale” in September 1941. It lasted for six performances, and the theatre was never used again. It was demolished in 1957.