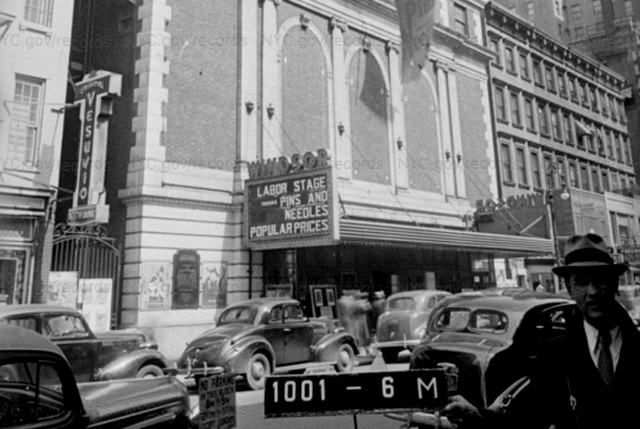 The 48th Street Theatre was built adjacent to his Playhouse Theatre by producer William A. Brady. Designed by architect William Albert Swasey, the facade was in a Colonial style with white glazed terra-cotta trimmings. Inside the auditorium seating was provided on orchestra and two balcony levels. There were four boxes on each side of the proscenium. The 48th Street Theatre was opened on August 11, 1912 with the comedy play “Just Like John”. From 1922 to 1925 it was leased to the Equity Actors Union as a home to their Equity Players.

In 1937 the four boxes on each side of the proscenium were removed and it was converted into a first-run movie theatre renamed Windsor Theatre. This only lasted a matter of months as it reverted back to legitimate theatre use by November 1937. In 1943 it was renamed 48th Street Theatre once again. In 1944 “Harvey” was a big hit, playing for the next four years. In April 1955 the controversial play “Tea and Sympathy” starring Deborah Kerr, John Kerr & Leif Erickson moved over from the Ethel Barrymore Theatre and played for ten weeks. The 48th Street Theatre was then dark awaiting its next production.

Disaster came at 9:00am on August 24, 1955 when (due to corrosion) the 10,000 gallons water tank above the theatre crashed through the roof into the auditorium. Luckily, no one was seriously injured. The owners of the theatre were prepared to resore the theatre and expand it, but there was insufficient room to do that, so the scheme was scrapped and the 48th Street Theatre was demolished in late-1955. A parking garage was built on the site.