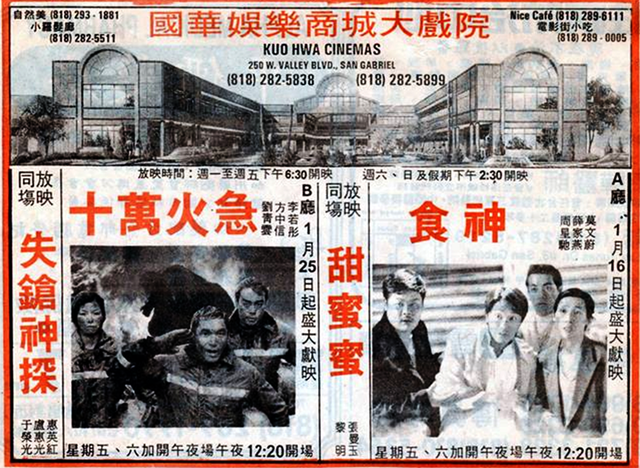 The Kuo Hwa Theatre (previously San Gabriel Theater/Edwards Century Theater/Bridge Theater) located on W. Las Tunas Drive was so successful screening Chinese movies in the 1980’s, that this Kuo Hwa 2 Cinema was opened on October 7, 1994. It closed in September 1998.

Cinematour lists Bridge Theatre as an aka for the earlier Kuo Hwa (aka Edwards San Gabriel/Century) at 330 W. Las Tunas. A comment on our Edwards Century page concurs.

I saw the original Hong Kong version of Jackie Chan’s Rumble in the Bronx here on March 1, 1995.

The Kuo Hwa Cinemas twin theatres opened on October 7th. 1994. It’s debut features were the Tsui Hark romantic comedy “The Lovers” in Theatre # 1 and in Theatre # 2 was screening Derek Chang Man-Gon & Siu Chung-Hon “RUN” an unauthorized remake of Robert Rodriguez' “El Mariachi”. The twin cinema closed it’s doors in September of 1998. I am currently finishing up research on this theatre for the “Bijou Memories” Blogsite. I expect to have a complete screening playdate for the theatres as well as some other valuable history. Stay tunned!

Edward Havens,
I was there as well. I saw it when they ran “Drunken Master 2” as the second feature. Good time. I miss that little hole in the wall.