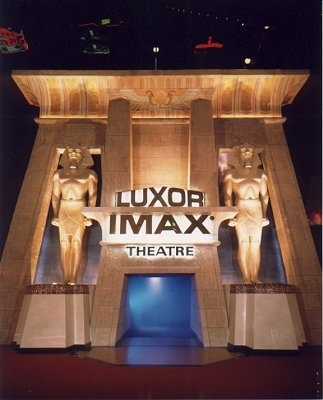 Located inside the Pyramid shaped Luxor Resort Hotel & Casino which opened in March 1993. The theatre was originally designed as a vertical VistaVision theatre with the screen aspect ratio of 1:2. The screen was twice as high as it was wide.

Once upon a time, there was a listing here for a venue at the Luxor. Actually, it was three IMAX-type HFR auditoriums that were part of an experience having to do with a pyramid or obelisk that was in keeping with the hotel’s theme.

I think the listing above was what became of the 3 venues that eventually closed.

I visited the place back in ‘94. I think I only saw 2 of the 3 because the price was quite high to see each of the short films. Picking the last of the three to see, I figured it would be the most engaging since it was the last. My only memory now is the last shot that had these anti grav vehicles that preceded the look of '97’s Luc Besson’s 'Fifth Element and the cityscape. There were no gee whiz great first person VFX shots that made an impression on me that I can recall. Maybe by this time, I had seen it all. :) Although, there are similar visual cues very similar to the Back to the Future ride at Universal, which was also new at the time.

There were speakers in the seats but don’t exactly recall if there were minimal motion such as rocking. I do know that there was a steep viewing angle in one (probably the last auditorium).

What I thought was cool was the search light at the top of the building. At the time, it stood out among the many Vegas buildings. When I was driving out of town, I took an 8mm DV shot of it for memory sake. Not sure if I took interiors..definitely, not of the movie auditoriums inside. If I can find that tape and its in viewable condition, I’ll try to post.

Did this IMAX screen the movie Titanic(1997 version).

I recall seeing one film here, All Access: Front Row. Backstage. Live! back in 2001. The most notable thing about this auditorium (other than the unique aspect ratio) was the seating itself. Due to extremely steep rake, each row was essentially on it’s own level accessed by a long winding ramp up. Once seated, the railing essentially became a semi-lap bar (otherwise it would block the screen). Now, obviously this theatre was built with an attraction in mind that would have a much shorter cycle time than a full length film so they would have to raise the railing if someone needed to get up to go use the restroom.