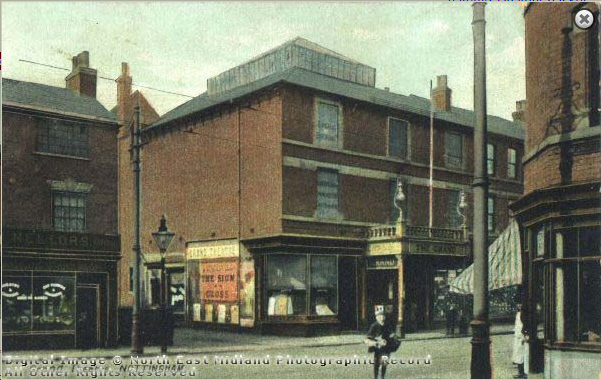 Located in the Hyson Green district in the north of Nottingham on Radford Road near the junction of Gregory Boulevard. The Grand Theatre opened as a theatre & music hall in February 1886. The first films were screened on 13th July 1896 and by 1911 films were being screened as part of the variety programme. In 1921 it embarked on a run as a repertory theatre with some film use operated by the Shapeero circuit. On 19th October 1925 it was taken over by the Provincial Cinematograph Theatres chain, which was part of the Denman/Gaumont Theatres circuit and reopened as the Grand Super Cinema and Variety Theatre with Norma Talmadge in “The Lady” and ‘High Class’ variety acts on the stage. It was equipped with a British Acoustic(BA) sound system in 1930.

The auditorium was behind the houses on Gregory Boulevard. The Grand Theatre was closed on 29th September 1956 with Guy Madison in “The Command” & Jack Webb in “Dragnet”. It was later demolished and the site is now occupied by a memorial park Garden of Rest and a car park.

On the wall of the chemists which stands next to Boulevard Gardens on Radford Road are a commemorative plaque and a sign. The plaque reads “The Grand Theatre site of Nottingham’s first public screening of films on 13th July 1896”. The plaque was raised by the British Film Institute in 1996 as part of their commemorations of a centenary of film in 1996.

On the map I’ve posted you can also see the Boulevard Picture Theatre further down Radford Road.