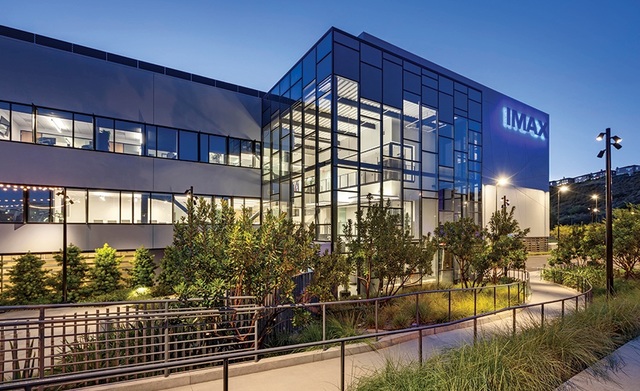 IMAX West Coast Headquarters was completed in March 2015 in the Playa Vista area of Los Angeles.

Designed by architect Douglas Peters of architectural firm Gensler and Associates, the 66,000 square-foot building cost of $45 million. Included with two auditoriums, seating 75 and 40 each, are production facilities and offices, employing more than 120.

At the center of the building beneath a large skylight is an amphitheater for gatherings of clients and staff and outdoor courtyard where special events are held.

Producers and directors, such as Stephen Spielberg, have used the theaters to view a final cut of their films. Not exclusively for industry insiders, public events are sometimes held. In March 2017 Michael Bay hosted a group of global super fans for “Transformers: The last Knight”. 20-minutes of footage from his film was followed by a Q & A session with Mr. Bay.

As for community involvement, in April 2016 IMAX held the premiere of Varda Bar-Kar’s “Balancing the Odds” for the Bernard Catholic High School, Playa del Rey.

Among other techs making a home in Playa Vista, giving it an unofficial name, Silicon Valley South, are Facebook, Google, Microsoft, and Yahoo.