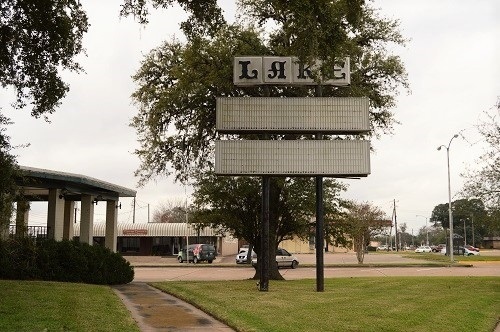 The Lake Theater was originally opened in 1944 in Lake Jackson, Texas by Alden B. Dow for the entertainment of his employees at Dow Chemical.

It served as a tradional movie theater until it closed and was then remodeled into an opry house and re-opened in 2000.

Dow Chemical Co. of Midland, Michigan, established their first Texas operations at Freeport in the late 30s to produce magnesium from sea water. The town of Lake Jackson was created as a bedroom community for the influx of new Dow employees.

Alden B. Dow (http://www.abdow.org/abdow/abdow.htm), an architect who had studied with Frank Lloyd Wright, was one of the Dow brothers and he laid out the entire town of Lake Jackson and designed all the public buildings. He was not involved in the chemical company operations and never owned the theatre.

I spent many a Saturday afternoon at the Lake in the 50s at the double features. For a while, I was a monitor, patrolling the aisles wearing my Safety Patrol badge from Jr. Hi. I delivered the paper to John Huebel’s residence for a while.

My earliest memory of the Lake is going to see a Red Skelton film with my parents in the late 40s.

There may be better pics on the City of Lake Jackson website or the website of the Lake Jackson Historical Museum, but I can’t get them to come up tonight.

Boxoffice of October 25, 1971, has an item about Lake Theatre operator John Huebel’s intention to build a 296-seat theater next to the Lake. The two houses would have separate entrances, but would share lounge space and concessions area, and would share one box office during most of the year but would use separate box offices during the summer season.

I don’t know if this project was carried out or not, but the Boxoffice item says that the architect for the small theater, Lloyd Borget, had worked with architect Alden Dow on the original plans for the Lake Theatre in 1942, and was the architect for a remodeling of the Lake done about 1967.

I’ve been unable to find any other movie theaters designed by Alden Dow, but he was the architect of McMorran Place, a public facility in Port Huron, Michigan, which includes a small arena, a convention hall, and a 1,157-seat theater used primarily for live events but which is also equipped to show movies. McMorran Place dates from the early 1960s.

I’ve been unable to find any other theaters attributable to Lloyd Borget, either, but he did work for the Houston architectural firm MacKie & Kamrath during part of the period during which they designed several theaters in Texas.

The Lake’s web site is gone, but it now has a MySpace page.

Joe, you are absolutely right about Lloyd Borget. Most of his work was with MacKie and Kamrath and they did do several theaters such as the Village Theatre in Houston. Borget worked at MacKie and Kamrath from 1949 to 1998, approximately. MacKie and Kamrath did several large projects in the Lake Jackson and Freeport area for the City of Lake Jackson and Dow Chemical Company, but Borget did some work on his own for the Lake Theatre and also designed about ten private homes in Lake Jackson. Other than a lake house in Central Texas, I have been able to find no other “under his own name” projects by Borget. I suspect he had a fondness for the area and was willing to undertake smaller projects that the big firm wouldn’t want to do. Borget’s biggest achievement was the design of the original M.D. Anderson Cancer Center in Houston.