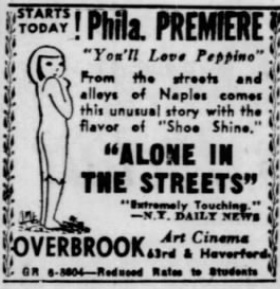 A neighborhood theatre in Philadelphia located at 63rd Street and Haverford Avenue. The Overbrook Theatre was opened in 1914 and closed in 1957. It reopened operating for a while as the Art Overbrook Theatre. In 1962 it was closed with Natalie Wood in “Splendour in the Grass” & Leslie Caron in “Fanny”. It was converted into a bakery. The Streamline Moderne style marquee survived until 1988. The building stood vacant in 2019.

This house appears to have reopened after 1957 as the Art Overbrook Theatre. A house of that name in Philadelphia was mentioned in the First Statement of the New American Cinema Group, published in the summer of 1961. The Art Overbrook had, along with the Bleeker Street Cinema and New Yorker Theatre in New York, pledged to exhibit films distributed by the group. This information was cited in Film Culture Reader, edited by Adams P. Sitney, published in 1970 (Google Books preview). The Art Overbrook Theatre, 63rd and Haverford, was advertising in The Philadelphia Enquirer by June of 1959.