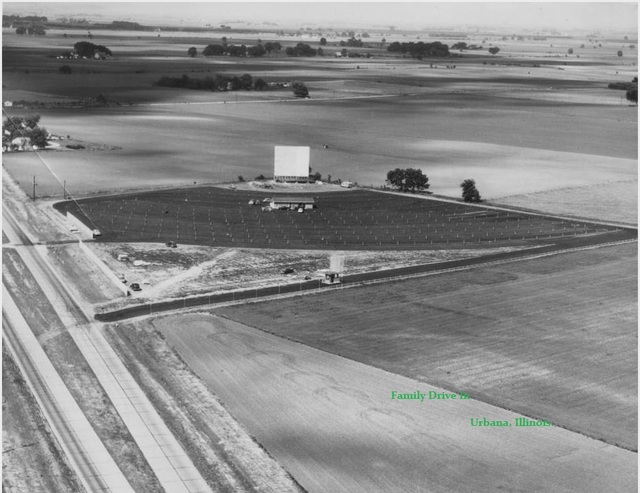 Opened in 1950 as the Family Drive-In, with a capacity 564 cars, the outdoor theater lasted a mere season before closing. It reopened in 1953, remodeled and modernized, including a bigger screen and paved lot. During the summer of 1953, a storm blew the new screen down, destroying the playground beneath it (luckily no one was injured). The next screen could accomodate 3D films and was refitted a year later for CinemaScope features. It was also about this time that the theater was renamed the Widescreen Drive-In.

The drive-in was sold to the Kerasotes chain in 1961, which began to screen more teen-oriented fare rather than big-name Hollywood films. Kerasotes screened a great deal of Roger Corman and Hammer horror movies during much of the 1960’s, though the occasional non-B-grade film was also shown.

Kerasotes considered building a second screen in 1969, but dropped its plans after neighbors complained about potential increases in traffic, noise and litter (as well as the increasingly risque films on its screen).

Due to decreasing popularity, Kerasotes closed the Widescreen Drive-In in 1986. It sat abandoned for years until 1993, when a blaze destroyed the projection booth and concession stand. Shortly afterward, what little still remained was cleared away after the area was rezoned for industrial construction.