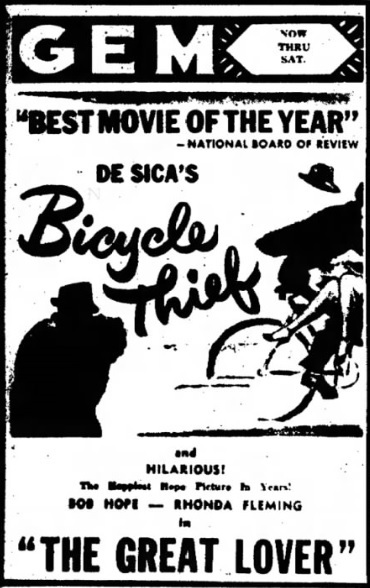 Located on Day Street near the corner of Main Street. Shea’s Theatre was opened in 1914. By 1950 it had been renamed Gem Theatre. It was still open in 1956, but had closed by 1957 and has since been demolished.

Shea’s Theatre on Day Street was under construction in 1914 when this item appeared in the February issue of The Electrical Contractor:

“In connection with its contract to wire and equip two theatres in Fitchburg, Mass., the Bruce-Heustis Electric Co. makes the following report: Shea’s Theatre, Day street, has a seating capacity of 850. first floor with balcony. The stage is to be fitted with all modern conveniences for the putting on of vaudeville acts and moving pictures. This theatre is illuminated by the semi-indirect system of lighting, using Equalite glass bowls. Mercury arc rectifiers are to be used in the moving picture machines, and the outside of the building is to be decorated with about six hundred and fifty to-volt, 5-watt mazda lamps arranged in the shape of set pieces in the panelling on the outside of the structure.”

The other theater for which Bruce-Heustis had the electrical contract was a larger house located on Main Street called the Quinlan Theatre. Either it is not yet listed at Cinema Treasures, was opened under a different name, or is listed under a later name and missing the aka.

Shea’s Theatre was the subject of this notice in The American Contractor of September 6, 1913: