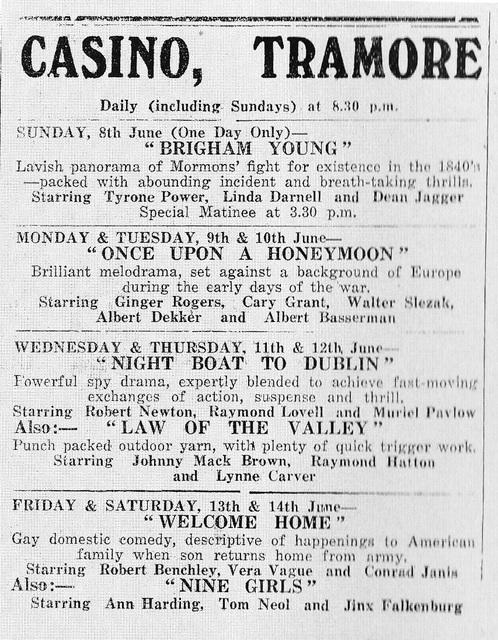 Located in Tramore, County Waterford. The Palace Cinema and was built by Johnny McGurk in 1926. It was reputedly an exhibit shown at the 1924 Wembley Exhibition which he had shipped to Ireland. McGurk had previously hired out the Pavilion Hall for films as early as 1915 showing Tramore’s Racing Carnival that August. As time went on pictures were shown three days a week in similar fashion to that of the Strand Cinema. When talkies came along he decided not to convert the Palace Cinema for sound and it most likely closed in the early-1930’s.

All was not lost though, and Thomas Cooper from Killarney, who had other cinemas in his portfolio, reopened the Palace Cinema as the Casino Cinema on 12th February 1942 with the Laurel & Hardy film “Flying Deuces”. It was a very short-lived venture though and, what with the Rex Cinema opening in 1945, closure came on 3rd January 1948. It was never listed in any edition of the Kine Year Book. It was converted into the Silver Slipper Ballroom. It has been demolished and Holiday Shops now stand on the site.

Later the Silver Slipper ballroom, demolished and replaced with the Holiday Shops. Was situated on Strand Road.