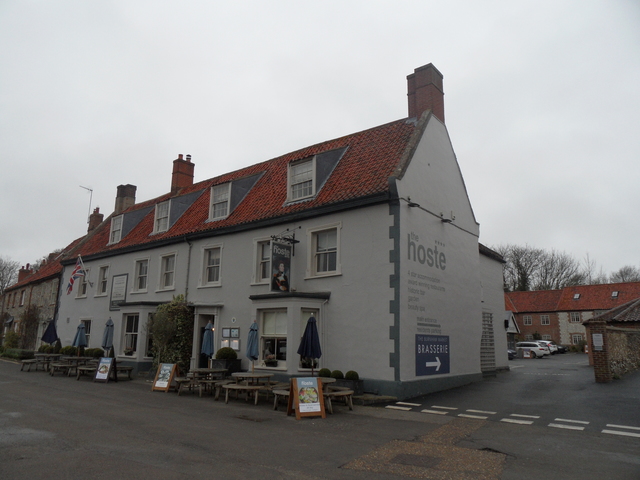 Situated just south of the north Norfolk coast, to the east of Hunstanton, the Hoste Arms Manor was originally the manor house of Burnham Westgate, built in 1550. It was first recorded as being an inn and hotel in 1651. Later owned by the Pitt family, it became The Pitt Arms, a well-known coaching inn, the first stop from Wells on the way down to London.

In 1811 The Pitt Arms changed its name to The Hoste Arms, after Captain Sir William Hoste, Lord Nelson’s protege. In the 1860’s it fell under brewery ownership and suffered 130 years of decline.

The inn was privately acquired in December 1989 and was rapidly transformed from a pub with no bedrooms and a small dining room, into a thirty-six bedroom hotel with a top class restaurant. It grew further from 2000 with the acquisition and conversion of neighbouring properties into luxury cottages. The Hoste Beauty Spa was launched in March 2011.

The ownership of The Hoste Group transferred to Brendan and Bee Hopkins in April 2012. They renamed it simply The Hoste. A stylish new Garden Room and reception area were added in May 2013.

In July 2016, following a 10 month refurbishment, a new gym and dining room opened - as did a small, luxury cinema, located adjacent to the gym in hitherto unused basement space.

This was opened by the late critic and TV presenter Barry Norman, who chose the first day’s films: “Gregory’s Girl”, starring John Gordon Sinclair and Dee Hepburn, Carol Reed’s “The Third Man” and “The King’s Speech”, starring Colin Firth. This pattern has been followed ever since, with three films shown each day, usually at 4pm, 6.30pm and 8.45pm.

Projection is from DVD/Blu-ray. Admission is free to hotel residents and diners, with public tickets available at £10 for adults and £5 for children. The cinema is available for private hire.

During my overnight stay at the hotel, on 9th April 2018, I enjoyed “Flightplan”, starring Jodie Foster, at 6.30pm, followed by the Daniel Craig version of “Casino Royale” at 8.45pm.