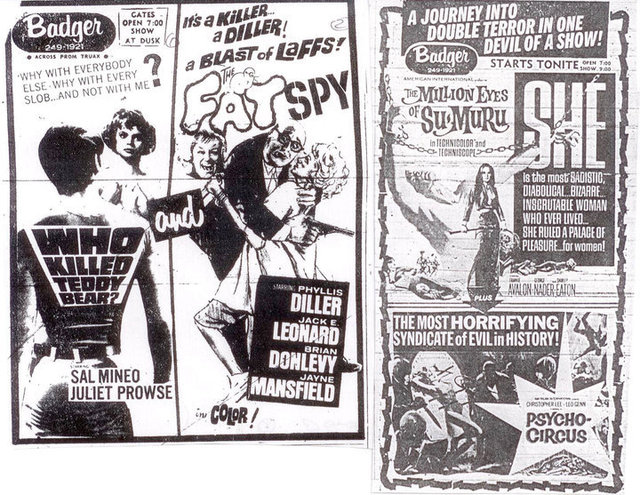 The Badger Outdoor Theatre, with room for 600 cars, opened September 4, 1948, with Rita Hayworth and Larry Parks in “Down to Earth”.

Liebenberg & Kaplan designed the theater with completely surfaced grounds, a modern concession building, and a 60-foot screen. The Wisconsin State Journal reported a mile-long line of cars tied up traffic for a half an hour on opening night.

August 26, 1955, was a big day and night, as reported by the Journal. Charlton Heston came to town to promote “The Private War of Major Benson” and appeared at the Badger Drive-In and Strand theater.

On June 15, 1979, it opened with four screens, room for 1,605 cars, and radio sound, eliminating the speaker posts. The operator was 20th Century Theatres, who operated the Big Sky Drive-In and eight other theaters in the Madison area. The Journal noted it was the first multi-screen drive-in to be built in the Midwest.

In October 1989 construction started on a business park on the site.

Speaker from this drive in being restored https://youtu.be/QfwCSDz2MEU