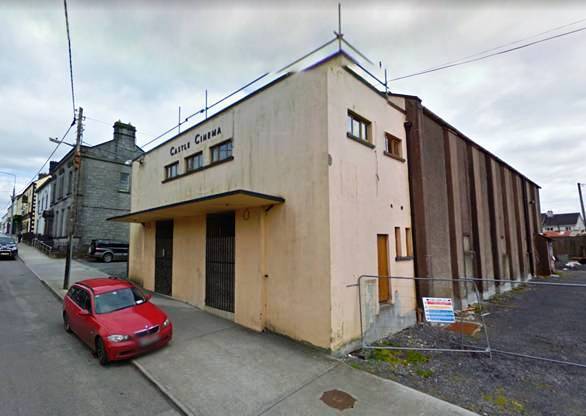 Located in Oldcastle, County Meath. The Castle Cinema was opened on 9th April 1944 with Luise Rainer in “The Great Waltz”. It is documented that owing to electricity shortages it would have to operate on a part-time basis. It had 450 seats and was equipped with an Ernemann, later Western Electric(WE) sound system. It was still screening films on a regular basis until closing on 5th July 1981 with William Holden in “Damien:Omen II”. It was later used for storage. The building was used on an occasional basis as a performance/special events venue named The Cinema Club which closed in 2017.

Opened 9 April 1944, closed for the summer recess with Damian: Omen II on 5 July 1981 and doesn’t seem to have reopened. Was recently in business as a performance and events venue called the Cinema Club Stage but no gigs found since 2017. First cinema in town opened by Charlie Fox during the First World War in what was Owen Clarke’s shop. Clarke took it over in 1928 and opened the Castle with Andrew Carolan Easter Sunday 1944 screening ‘The Great Waltz’.