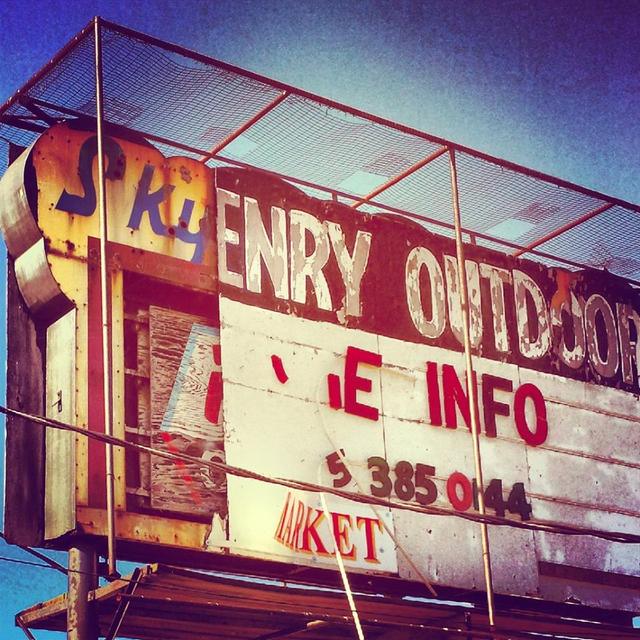 The Skyline Drive-In opened on July 20 1951 with John Derek in “Rogues of Sherwood Forest”. It could originally accomodate 750 cars and was operated by Roy J. Miller.

It was renovated after the end of the 1976 season and reopened as the McHenry Outdoor Theatre on April 29, 1977. It is one of only a couple of drive-ins still in operation in the Chicagoland region. It’s season runs from May-September and screens family-friendly fare.

Opened as the Skyline Drive-In on July 20, 1951 with “Rogues Of Sherwood Forest”, starring John Derek, Dianna Lynne, Alan Hale (Sr.) and George MacReady. The drive-in was given a complete renovation after the 1976 season and re-introduced as the McHenry Outdoor on April 29, 1977.

On a Saturday morning in 2014, Scott Dehn received the long-awaited news that the McHenry Outdoor Theatre will get the digital projector it so desperately needed. It probably wasn’t quite the way he’d envisioned the moment going. Dehn, the theater’s owner, was in the middle of an on-camera interview with a crew he’d been told was from a film-related website. Turns out, the crew was from Honda, and they were there to reveal that McHenry Outdoor has won one of five digital projectors the company is giving away through “Project Drive-In.” “The interviewer, the last question he asked me was, ‘How does it feel to win a digital projector?’” Dehn said. Dehn told the guy he’d misunderstood the situation, and that the theater hadn’t won anything yet. That’s when the crew revealed they were from Honda and that McHenry Outdoor had won, Dehn said. “I just fell down to my knees and broke down for a little bit,” he said. “It was pretty emotional.” Dehn has been trying to find a way to update the theater’s equipment since he took it over in early 2012. Because of the movie industry’s ongoing switch from 35 mm film to digital – a format cheaper for studios and distributors – theaters across the country are having to move fast to install digital projectors. Otherwise, their owners are left choosing from a dwindling selection of movies produced on the old format. The change has hit smaller, independent theaters hardest, and threatens many home-grown drive-ins like McHenry Outdoor. Dehn’s campaign on the fundraising website Kickstarter to raise $130,000 for the projector and accompanying maintenance fell short. Kickstarter projects that don’t reach their goals don’t receive any of the funds that donors pledge, so Dehn had to go back to the drawing board. Through online efforts and other donations, the theater had raised $5,000 toward the switch. But under Project Drive-In, Honda’s attempt to help preserve what they call an “iconic part of American car culture,” Dehn turned his attention to asking for votes rather than money. It worked. Voters willed McHenry Outdoor to a spot among the contest’s five winners. “They came together to support something they love,” Dehn said. “I couldn’t be more proud to say I’m from McHenry.” He said it was like getting “the weight of the world” lifted off his shoulders when he found out his theater would survive the switch to digital. The extra $5,000 raised will go toward other repairs. Dehn plans to have the theater revamped and running with the digital projector by next season. “There’s a lot of beautification and a lot of repair work that will be done,” he said. For now, it’s time to celebrate. Dehn was with family and friends Saturday night at the drive-in for a showing of “Ferris Bueller’s Day Off.” “I think we’re just going to take a deep breath and enjoy the moment, enjoy these last few days of 35 mm film we’ve got left,” he said. Dehn wasn’t the only one soaking in the evening Saturday. Cars flooded the theater parking lot as the sun disappeared. Families sat out lawn chairs and tables or piled in the back of pickup trucks. Many curled into blankets as the air cooled. “It’s awesome,” said Cheryl Burke, of Cary, who was playing Scrabble with her husband, Jim, and 15-year-old son, Adam, before the movie started. They’d been planning to come out anyway but when they heard about the projector, a movie became a must. “We own ‘Ferris Buehler,’” Cheryl Burke said, laughing. “But we came here to watch.” Ed and Tammie Majkrzak and their kids Gracee, 11, and Alayna, 8, who live so close to the theater they can tune into its radio station from home, were similarly familiar with the classic flick. But it didn’t matter. The theater is about the experience, they said. We’ve never seen it on the big screen,“ Tammie Majkrzak said. Before the movie started, Dehn spoke through the radio to the crowd, thanking them for their support. Theater-goers responded with car horns that played like applause. "Wow,” Dehn said. “What a night.”

Has the marquee(in the above photo) been enclosed?

The cover photo marquee stood near IL-120 and Chapel Hill Road, between the Shell and abandoned copy shop. The wind eventually took the rest of the McHenry Outdoor signage off to reveal the rusted original Skyline marquee. Unfortunately it’s since been removed.

Is the marquee being restored and put back in place or being replaced?

Is there a flea market there too?

Current Trib article about the operators purchasing the property.

Unfortunate news that it will not be able to reopen May 1st as planned, as the State reversed course after giving them the go-ahead.

WTTW piece on the re-opening.

Before Its CinemaScope Installation In 1954, The Original Screen That Was Used Since 1951 Is 52x70 Ft.