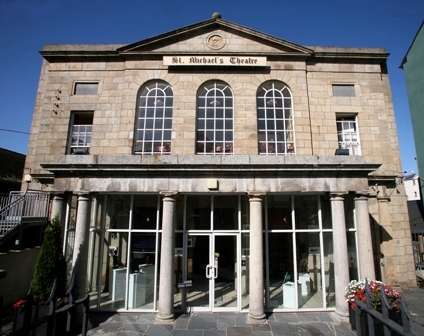 Located in New Ross, County Wexford. Originally built in 1806 as St. Michael’s Church. The theatre is based in the Town Hall which had been screening films as early as the 1920’s. In the 1940’s the Town Hall was known as the Savoy Cinema which is likely to have closed down following opening of the Ritz Cinema immediately next door at the end of that decade. The Theatre took over the building and reopened it in February 1960 with a production of the “Country Boy” by the Abbey Players.

It closed for refurbishment in May 1997 reopening on 3rd May 1999 with a production of “Love in the Title” by the Abbey Theatre. The hall was equipped to enable films to be shown in 2003 and it screens once a month except in the summer season. The theatre has 298 seats along with a 50-seat studio venue and also features an art gallery on site. It is home to three different community-based theatre companies and operates a successful youth arts programme.

This building was originally St. Michael’s Church built in 1806 hence the name.