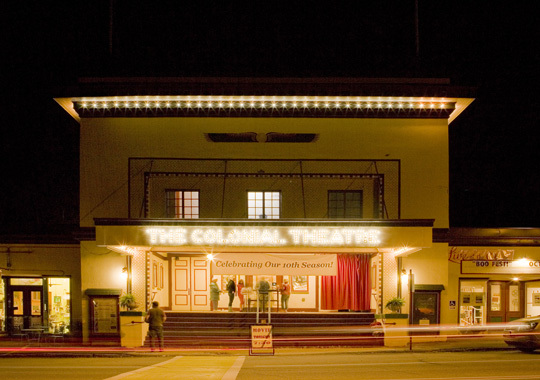 Located in Bethlehem, NH, in the heart of the White Mountains. Recently placed on the list of NH historic places, the 325 seat Colonial Theater was built by Karl Abbot, scion of Bethlehem hotelier Frank Abbott. In the summer of 1914 Abbott, and his partner “Doc” Clark, brought the new century to northern New Hampshire first by converting the family stables to house Humpmobiles, “flivvers” and Stanley Steamers, and secondly, by housing that other most significant icon of these “Modern Times”.

By spring of the following year construction was complete and the Colonial Theater opened for business July 1, 1915. Its architect, Francis Kennard, designed public buildings, private residences and hotels, many now on the National Registry, including the largest wood framed building in Florida, the Bellview-Biltmore Hotel in Belleair.

During the 1910’s and 1920’s, Bethlehem held the distinction of being the premier summer destination resort in the northeast with over 30 hotels and four trains arriving daily. Recognizing the diverse and cosmopolitan nature of the summer population, major Hollywood studios used the Colonial Theater as a test market for their films.

The Colonial Theater remains a significant architectural link to both the history of motion pictures and the era of the grand hotels, and continues to bring the best of independent films, live music and theatre to the White Mountain region. It now has 298 seats, plus two handicap seating areas with access elevator and assisted listening devices.

The Colonial was sold a year or two ago to the present owners. It previously had been owned by a wealthy businessman who also owns the movie theatre in Littleton. I saw one of the weirdest movies I’ve ever seen at the Colonial. It was titled “Northfolk” and starred James Woods and Nick Nolte. The theatre was also a little strange. It had no candy counter. They sold popcorn from a popcorn wagon outside under the marquee. Possibly the reason for this was because, as I remember, as soon as you entered the theatre you were in the auditorium — there was no foyer or at least I don’t remember one. The theatre is very basic but the popcorn was good and the staff very friendly. There’s a great restaurant directly across the street from the theatre.

When I revisited the Colonial in Oct. 2004, to see “Maria Full of Grace”, I noticed some significant changes. Grant monies from all levels of government have been donated and lots of work is ongoing. The marquee was in the process of being rebuilt as well as a handicap accessible ramp, although entry is through one of the side exit doors. A plaque outside the theatre bodly states: “The oldest continuously operating theatre in the United States. I’ve seen this claim by other theatres so I’m not sure how accurate this information is. The Colonial is also a seasonal operation so does that still qualify it as "continuosly operating”? Ah, semantics —how complicated they are. Anyway, despite the controversy I stongly recommend a visit to the Colonial. Yes, the popcorn and soda cans are still served outside before you enter the theatre. A small box of popcorn is $1.00 and you help yourself to the real butter. Some things are just better in New Hampshire.

I remember the projector being way too loud – being close to the front row you could even hear it. The sound also isn’t optimal. Nevertheless, the theater is doing it’s best to renovate itself, and at least for the summer season, smaller, limited release movies get to play in northern New Hampshire.

This theater is still going strong with an interesting and up to date selection of indy films showing through the summer/fall months together with live performances. There was a recent piece in the Boston Globe about the problems smaller theaters in New England are having with the change over from film to digital projection and the following quote is relevant to this theater.

Yet Dignazio is planning to install a digital projector in the coming year; like all the other theater owners struggling to survive, he feels he has no choice. If the Bethlehem Colonial wants to show any new releases from the major studios or their art house boutique wings — let alone 3-D films or 48 frames-per-second blockbusters like “The Hobbit” — it’s convert or die.

The Theatre Historical Society on-line archive has the MGM Theatre Report for the Colonial; it’s Card # 472. Address is Main St. There is an exterior photo dated May 16, 1941. Condition is Fair. The report says it was opened 1925 which is incorrect, that it shows MGM films, and has 470 seats. There is a note that it’s a summer operation, with an 11-week season. The 1940 population was 1,000.