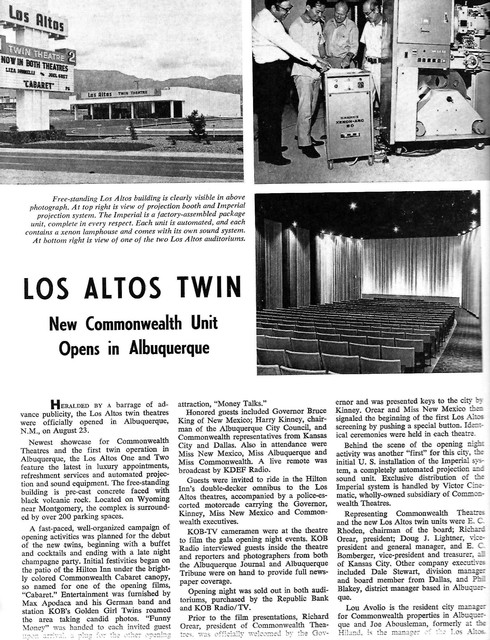 Built by Commonwealth Theatres, the Los Altos Twin was located on Wyoming Boulevard NE near Montgomery Boulevard NE, in a free-standing building of precast concrete faced with volcanic rock with over 200 parking spaces surrounding the theatre. It featured the Imperial automation system and opened on August 23, 1972. It had closed by 1882 and was demolished.

This twin had a brief life. It had already been closed when the October 20, 1985 issue of the

Rather than being slated for demolition, the article said, the theater building was to be moved to a site at Yale Blvd. SE and Southern Ave. SE. How the developer proposed to move a large precast concrete building more than seven miles I don’t know, unless perhaps it was dismantled and reassembled. I’ve checked Google street view of the area around Yale and Southern, and there are a couple of buildings that might have been built using the theater’s parts, but there’s no way to tell if one of them actually was.