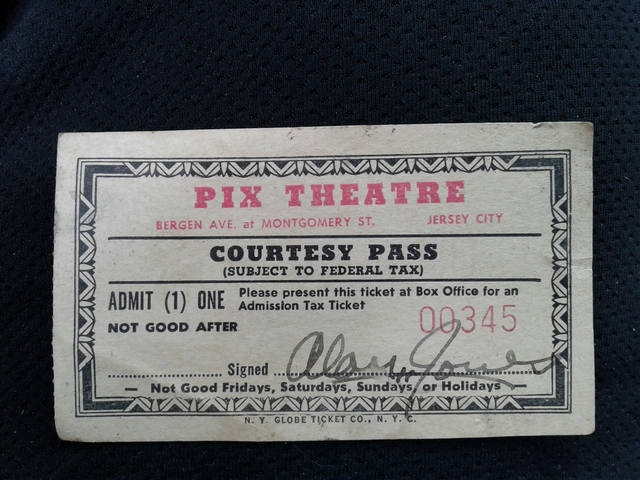 On McGinley Square. At one time the Bergen Theater, then re-named the Pix Theater in the early-1950’s. Tried fighting off television by having more sophisticated movies and by having a coffee house atmosphere. The Pix Theater was closed in fall of 1976. It became a roller rink and is now home to a church and retail in the lobby space.

The louder they yell, the harder they fall.

Well, I think around ‘72, the PIX did start showing x-rate fare such as “I Am Curious (Yellow)” and “Fritz the Cat.” Perhaps Whalen was ranting about those “dirty” movies.

And as “X-rated” fare, “Curious” and “Fritz” were pretty clean stuff.

In the mid 70’s the Pix alternated between X-rated and standard fare. I remember being about 8 or 9 and seeing a matinee of Disney’s animated “Robin Hood”. A week later I walked past the theater (it was in my neighborhood) and it was showing “The Devil in Miss Jones”!!
By Summer 1975 the theater had returned to 2nd run standard fare at a cost of 99 cents. I have fond memories of the first show they had, “The Towering Inferno”. I remember about 14 kids from the block going up on a hot summer night to see the film.
I spent many days of my youth watching endless double bills in the dark at the Pix. Usually the 2 films had absolutely nothing in common. “Earthquake” & “The Great Waldo Pepper”, “Once Is Not Enough” & “Harold and Maude”, “Shampoo” & “The Stepford Wives”, “Futureworld” & “The Reincarnation of Peter Proud” were just a few. I remember the upstairs lounge and I remember that there was no time between shows. When the film ended, it (or the second feature) began immediately.
I probably saw more movies in any given year at this time then in all the years I have ahead.
I still remember the last films I saw at the Pix on a rainy autumn afternoon in 1976. Just before the theater closed, they may have been the last show. “The Omen” & “Race With The Devil”
After that it became a roller rink before its current incarnation.
The fond memories will never fade.

I graduated from Hudson Catholic in ‘75, but, I don’t recall having gone to the Pix past '72 or so. Do you remember the Journal Square palaces? I have fond memories of the Hudson Plaza Cinema in the late 60s up till around '75. I moved out of Jersey City (to Clifton in '77) and then to NYC in 1980.

And I almost forgot about the color television in the upstairs lounge. It was placed there by Goodman’s furniture store, just a bit north of the Pix on the other side of Bergen Avenue. Nice way for Goodman’s to get folks to come to their store for their first color TV. And, ironically, a harbinger of a not-too-distant future.

i remember my mother draging me there as a little kid and being bored by the movies there. i would go upstars to the tv, and hoped there would not be anyone watching so i could watch whatever i wanted

Some time in the seventies the Pix screened a cut version of Deep Throat. One of Jersey City’s finest and a friend of mine now deceased badged his way in. He soon realized it was cut because he had seen it previously in NYC. FurIous he asked the manager for his money back. Only in JC.