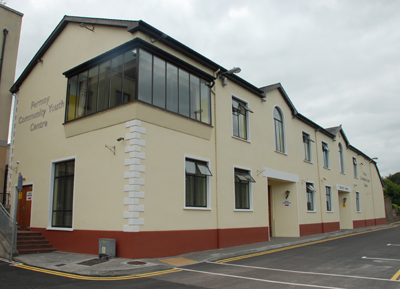 Located in Fermoy, County Tipperary. The Palace “Hall” is believed to have opened in 1909 and was showing films as early as the 1920’s. It was run by the O’Brien family and was equipped with an ERF, later Kalee, sound system and held 500 people. The proscenium was 40ft wide and it presented occasional variety shows, utilising its four dressing rooms. It also had a dance hall.

The parish took over in the 1970’s and established a youth centre in the premises latterly known as Fermoy Youth Community Centre. Films appeared to be ongoing until the projector broke down in 2009. In September 2013 the Centre’s auditorium reopened as the Palace Theatre and screens films under the Kids’ Film Club banner. Otherwise you can hire the cinema and bring your own DVD along. One can also partake in a number of other events in the building including Taekwondo and bingo.

During the 1920’s films were also screened in the Assembly Rooms in Francis Street.