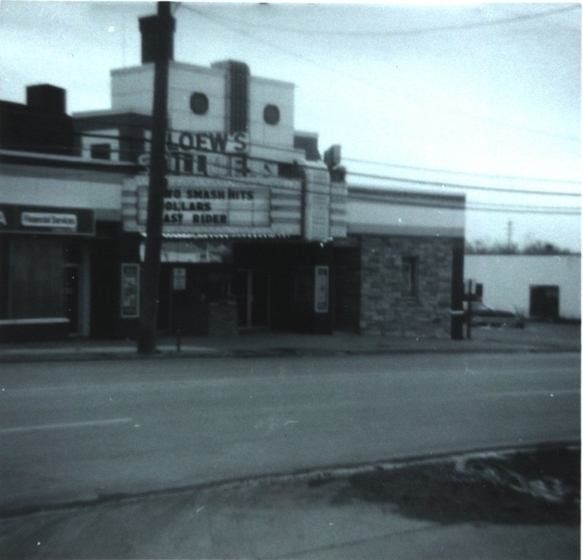 The theatre was used briefly by Bob Kay AMC as a storage area, then was demolished in 1980 to make way for a Ford dealership (first Bob Kay Ford, then Liberty Ford, now Frank Nero Lincoln Mercury.)

Actually, I believe the Stillwell opened in ‘39 and was expanded from 850 to 1100+ seats in '41. It was on Cleveland’s “A” circuit, showing the biggest features, unlike the newer, nicer, bigger Mapletown not too far away. I remember the remodeling to accommodate the Cinemascope screen, and when they closed off the soda shop next door, (Mom worked there when she was in school) and reduced it to a mere lobby concession stand. The Stillwells were big on technology—I visited the booth before its closing-'couldn’t believe the audio-tape machines installed there, probably coincinding with “Around the World in Eighty Days” in Todd-AO 70.
When this site can take photos, I’ll send some-would you believe
AMC Gremlins in front of the Popcorn Stand!

A small community here in Nashville has been using an old Howard Johnson’s restaurant as their city hall. As I passed it yesterday I remembered that there had been one across from the Stillwell, Orange Roof, Steeple and all, right between the Dodge Dealer and the Ford Used Car lot!

This theater was own by Lowes Corp from the Mid 60’s til it closed in 1977. Only theater that they didnot twinn.

The Stillwell Theatre was built for Lena Stillwell, operator of the Bedford Theatre. Boxoffice of January 18, 1941, announced that the plans for the new house, construction of which was expected to begin that spring, had been prepared by Cleveland architect Paul Matzinger.

Thanks for the photo Toby.

My parents introduced me to this theater in the late 1950’s,it was always treated like ‘a step up’ from some of the other neighborhood theaters in the suburbs closer to Cleveland. I remember “PT 109”, “Charade”, “Arabesque” and “Walk Don’t Run”(Cary Grant’s ‘swan song’)….I too remember the Howard Johnson’s across the street, and the Manners' father up Broadway into Bedford proper, and the Kenny King’s KFC on the way to Northfield Rd…..what an enjoyable and exciting youth I was allowed to have………