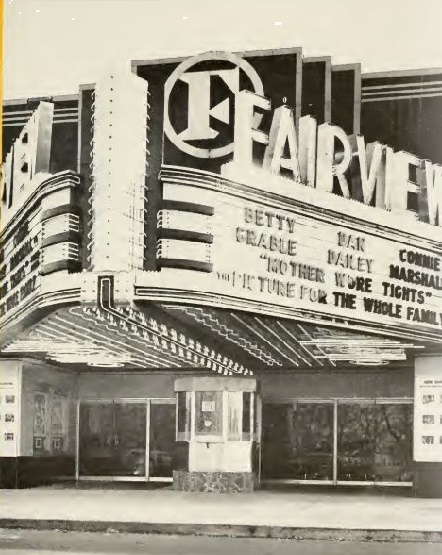 The Fairview Theatre opened in 1948 in the then-new Fairview Shopping Center. The marquee had a distinguished-looking stainless steel “F” above. All 1,800 seats were on a single sloping floor. There was parking for 300 cars in front of the theatres and a 1,500-car parking space at the rear of the theatre. The Fairview Theatre operated as an independent, and by National Theatre Corp., until 1992 or so.

The theatre was demolished to make way for a Tops supermarket. However, the stainless steel “F” was salvaged and is currently used to identify the Fairview Shopping Center.

Here is part of an 8/1/85 article from the Elyria Chronicle Telegram:

FAIRVIEW PARK â€" A couple of days ago, residents and merchants near the Fairview Theater were scratching their heads in amazement at the signs proclaiming the 38-year-old theater had been closed. The ink was hardly dry on the signs on the theater doors at 21655 Lorain Rd. when businessman Morrie Zryl replaced them with signs that told of the next attraction-“Will Reopen Soon.” “We’ll be opening sometime in August – the 23rd at the latest,” Zryl said. “We’re going to turn it back into a first-run theater.”

Zryl, who owns the Colony Theater on Shaker Square, said he knew more than a month ago about plans by National Theatre Corp. to close the double-screen theater because of sagging profits. He said he considered the purchase of the theater as a chance to offer the same kind of good movies on the west side that he now offers on the east side at the Colony. In recent months, Fairview had been showing sub-run movies, which are usually films four to eight weeks old. “We will offer mostly firstruns, but we won’t turn down showing quality sub-runs, Zryl said. "Fairview Park fits in nicely to my plans.”

Russ Winter, vice-president of National Theatre Corp. in Lyndhurst. said his decision to close the theater was in line with a growing trend in metropolitan areas away from single screen and double-screen “neighborhood” theaters. He said multiple screen movie houses were much more profitable. “There’s something neat about a single service theater, but they’re not making business,” Wintner said. “The industry has changed. Per capita, we do a better business in multiple theaters.â€ Zryl, who has operated the single-screen Colony Theatre for the past four years, vehemently disagreed that people do not want to go neighborhood-type theaters anymore.

Here is another Chronicle-Telegram article dated 1/20/89:

FAIRVIEW PARK â€" Less than three weeks after the Fairview Theater closed its doors, it will re-open today under new management. The 1,400-seat, twin-screened theater in the Fairview Shopping Center, was closed Jan. 2 by former owner Morrie Zryl, who acquired the theater in 1985 after it was closed by National Theater Corp.

At the time, Zryl hoped to be able to offer quality film fare, including acclaimed art and foreign movies, to discerning western Cuyahoga County, and Lorain County moviegoers “For a while, it worked, and then they just stopped coming,” said Zryl “I just don’t understand it.” Despite that, the theater reopens today under the management of Al Saluan, owner of the tri-screen Lake Theater in Euclid, according to Zryl, owner of the Colony Theater in Shaker Heights.

Saluan, who spent the week cleaning and installing new fixtures in the theater, the largest on the west side, said the need for a movie house offering family fare is still very real Assuming his operation as a second-run house is successful, Saluan hopes to eventually offer first-run fare “I wish him all the luck in the world because it’s real tough as an independent,” said Zryl “I know ”. Over-saturation, lack of available product, and fierce competition from major chains all combined to sound the death knell for Zryl.

I question the first-auditorium photo-submitted by ken mc in March 2007 above, because the Fairview did not have a balcony. The other photo is correct . It did have the circular couch shown in that photo.

Photos of the Fairview’s auditorium (which was indeed without a balcony) were published with the article. The design by Fox & Fox was decidedly Art Moderne, not Art Deco. Also, an October 11, 1947, Boxoffice item said that the American Seating Company had installed 1,789 seats in the Fairview. That’s probably an accurate seat count.

I too have to question the auditorium photo above. The Fairview had no balcony and I don’t remember the side walls being angled. It’s been 50 years since I was inside this theatre so my memory may have faded, but definately no balcony.

Great pictures,wish Clint would have been on the “WHERE EAGLES DARE"Marquee,but i guess at that time Burton might have been a tad more famous,just a tad.By 1970 Clint wouldn’t have to worry about top billing .

Here are links to the pictures of the Fairview in Boxoffice of January 31, 1948, that I cited in my previous comment:

The cover of the Modern Theatre section, featuring a picture of the marquee and entrance.

The first page of Elsie Loeb’s article, with two photos; a close-up of the entrance showing the marquee soffit, and a shot of the lobby and concession stand.

Additional photos showing the auditorium and other interior areas of the house are on the next page but one (click the “next page” links at top or bottom) and additional text is on the page after that.

Thanks Joe.real nice look back at a grand theatre.