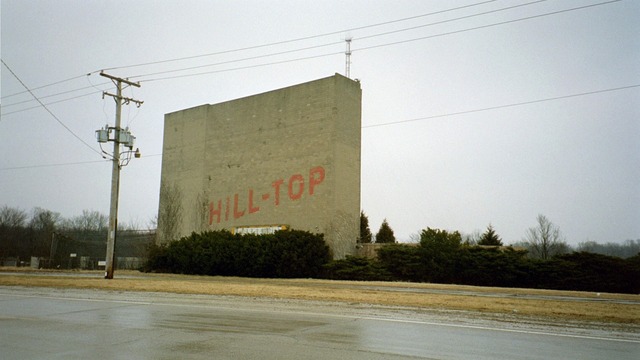 Operating since August 1949, this popular 1950’s-vintage drive-in, with a large, single screen, and capacity for 623 cars, closed suddenly in the middle of the 2001 season and has remained abandoned since, falling victim to vandals and disrepair.

As plans were being made in 2018 to eventually reopen the Hill-Top Drive-In, the screen was badly damaged by a wind storm in summer of 2020.

The Star of Tinley Park wrote on Aug. 22, 1963 that the “Hilltop” was celebrating its birthday Aug. 23-25. “Five years ago the theatre was transferred from the impersonal step-child operation of a large absentee theatre chain to the family style management of a neighbor.”

Owner manager Irwin S. Joseph said he was building a beach and showing the movie Beach Party that weekend.

On July 15, 2001, apparently not long before the abrupt closure, The Star returned to the “Hill-Top” with an affectionate look at one of the few remaining drive-ins. It was open Fridays through Sundays and often filled to its 500-car capacity on Saturday nights.

According to Chuck’s Photo Spot, David Friedman and Irwin Joseph bought the Hill-Top in the late summer of 1959.

Friedman’s book about the Hill-Top and much more, A Youth In Babylon, is currently available at the Internet Archive.

Can anyone tell me if the owners want to sell the Hilltop Drive in Theater????

Irwin Joseph passed away in 1964. His widow briefly retained the Hilltop, then sold it before the 1965 season to something called “Joliet View Corp., headed by G. J. Shimbach” (per Boxoffice). L&M Theatres, or L&M Management, acquired the Hilltop in April 1967.

The Motion Picture Almanac listed the L&M Management circuit, with the Hilltop as one of its holdings, through the 1986 edition. The MPA’s drive-in list kept the Hilltop one more year, but it dropped out in the 1988 edition. This is a strong indication that the drive-in was closed for a few years before Saul Ornelas and Adrian and Arturo Contreras bought it in 1995 (per edison’s post above).

A letter to the editor of the local Herald News, published July 15, 2001, said, “On July 1, when there was no sign of a movie starting by the customary 8:30-8:45 p.m. time, several cars began to honk their horns. A bit annoying, yes, but pretty normal behavior for a drive-in theater. One of the employees of the Hilltop stepped out of the projection room and loudly yelled a string of profanities at the crowd … If this is the way that the Hilltop is going to be managed, with a total lack of professionalism and customer courtesy, it is sure to be nothing more then a memory in the very near future!” That author was right.

For a couple of years I had been meeting with Saul Ornelas, one of the current owners of the Hill-Top, about updating the projector to digital and re-opening the drive-in. Part of the motivation was sparked by the completion of a nearby highway extension (I355) that even offered easy access with a new exit. We had a very workable business model planned, including the crowdfunding of the new projection system, for which I secured a quote. There was still a lot to deal with from the business being inactive for so long. It was literally off the electric grid and needed a full rehab just to get up to code.

Sadly, during the summer of 2020 a serious storm with high straight-line winds took down most of the screen, it being a shallow cinder block structure. What’s left of it is likely not repairable.