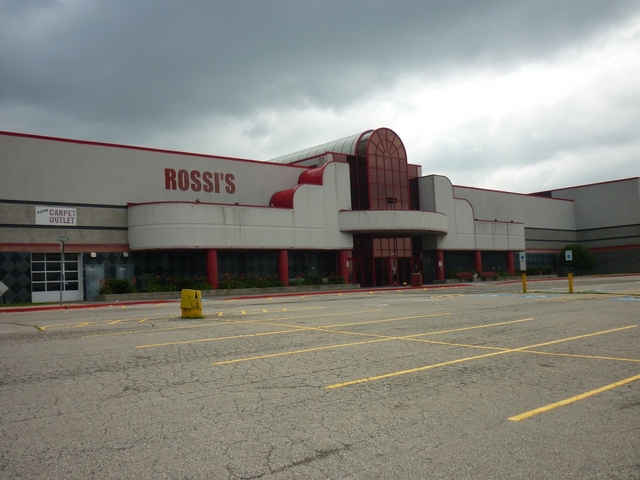 This modern megaplex was in business for only a short time. It opened in November 1999 and closed on June 28, 2001 as a result of the Loews Cineplex bankruptcy. Competition from the nearby Destinata 24 megaplex, less than two miles down Route 30 and opened around the same time as the Loews, hurt business as well. The theater sat boarded up for some time, and was then converted into a retail mall.

An inglorious fate for what should have been a great cinema.

Check out their Facebook page – fascinating – it looks like they’ve half-gutted the theatre with venders popping up all over the corridors and lobbies, almost something out of the third world.

I installed the projection equipment in this theatre in October 1999 using over 2000 zip ties. In march of 2001, i cut out over 2000 zip ties. Maybe I should have used Velcro? This theatre was actually much nicer than Destinta, but the location, unruly moviegoers, the unskilled “projectionists” and the “New York” attitude of Loews guaranteed few return customers.

The real sad commentary was that Lowes tore down the really nice drive in (5 screens if I recall correctly) that was on the site so as to build this complex.

@muviebuf The old theatre building shares a parking lot with a WalMart. A true two-headed monster took down the Greater Pittsburgh Drive-In.

Does any part of this former Loews Theatre still exist inside? or has it all been torn out to make way for the Flea Market. This had to be one of the shortest lifespans of any theatre during the multiplex building boom in the late 1990’s and early 2000’s.

I remember going there when it first opened in 1999. I was still mad that the Greater Pittsburgh Drive In was torn down to make room for the movie thearter, but blamed wal mart more, still mad about it all these years later. Just wish wal mart would have closed as quickly as the show. Anyway, I only liked going to this show because it was never crowded and close to my house, but still can,t believe it closed as fast as it did. I was hoping when it closed they would have made it a maxi saver show. Too many thearters in the area with the Desenta theater, now the Phoenix Theater in North Huntington and the Loews in the Homestead Waterfront. Should have built a 2 screen Greater Pittsburgh Two Drive In instead of the movie theater on that property, right.

Built on the Greater Pittsburgh Drive-In Theatre’s former spot on Route 30 was the David Rockwell-architected Loews North Versailles. The 20-screen, $20 million megaplex had 4,200 seats with its largest auditorium seating 635 and sporting a 60 foot screen. But with competition from the Destinta Theatre nearby at Pittsburgh Plaza in Versailles and Loew’s own Waterfront 22 within ten miles opening in 2000, this was going to be a financial challenge.

In 2001, Loews Cineplex Circuit filed for bankruptcy protection likely able to duck creditors in some of its failed new locations in overbuilt situations. The Loews 20 North Versailles fit the bill perfectly and was quickly shuttered on June 28, 2001.