The Cinema I & II opened in the Morningside Mall on March 28, 1974 by ABC Interstate Theatres. Later taken over by Plitt, Commonwealth Amusement Theatres and closed on September 29, 1983. 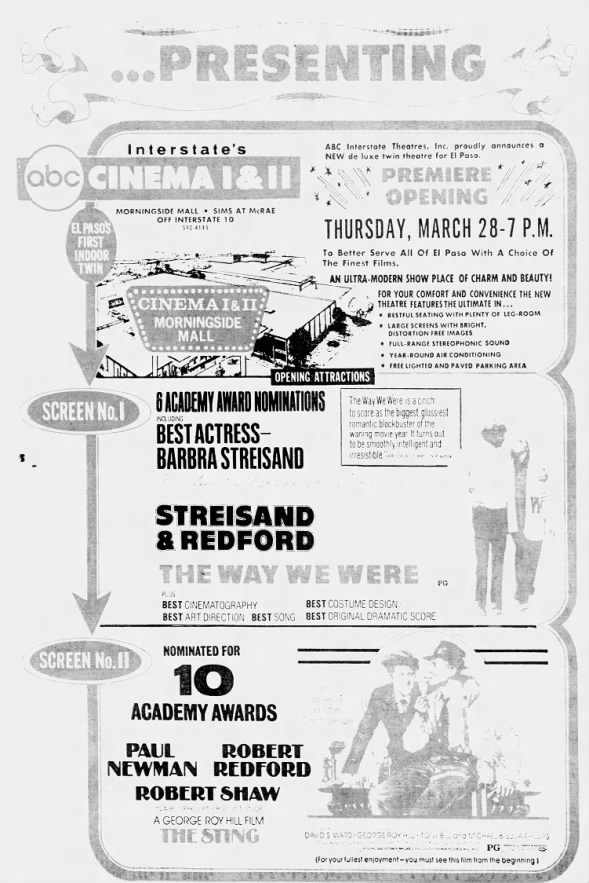 The Morningside Mall was announced in February of 1973 by Browne and Kink Company. One of the original 60 tenants signed on was a new Jerry Lewis Twin Cinema by Network Theatre Corporation and franchisee Lou Johns. It was to have been the second Lewis Cinema in El Paso. But, as was the case with many of the Jerry Lewis locations, some of them just never opened and others were taken over by other circuits. As the Lewis concept was cratering and lawsuits piling up, Johns was taking Lewis' parent company to court in 1972 saying he got nothing for $50,000 in franchising costs. He was likely to deep in line to collect as Network Cinema hastily terminated operations leaving Johns and El Paso Jerry Lewis-less.

ABC Interstate Theatres was next in court over the location in 1973 trying to get permission to take on the Morningside cinema project. Because the circuit was in violation of antitrust / anti-competitive practices, they needed clearance from a federal judge to add a new theater in El Paso. The court said “yes” and the Morningside project moved forward with Dallas-based architect, La Vere Brooks of Brooks and Orendain, drawing the plans. The theatre opened along with many merchants on March 28, 1974 as the ABC Cinema Twin 1 & 2 - Morningside Mall. Opening films were “The Sting” and “The Way We Were.” And the Morningside Mall celebrated its grand opening on August 1, 1974 with virtually all of the other original merchants, which had dwindled to just 40, then ready to go.

The theatre had two screens with Auditorium 1 having 500 seats and Audi 2 with 300 seats for a total count of 800. Norelco Rotomatic automation with Century projectors using RCA soundheads and Technikote screens were among the features there. In September of 1979, the facility became the Plitt Cinema Twin 1 & 2 - Morningside Mall when Plitt acquired the ABC Theatres. Unlike major malls that might request 20- and 30-year leasing agreements, the Morningside was a minor mall and only had 10-year leasing agreements. In May of 1982, Commonwealth Amusements had the unfortunate timing in acquiring the Cinema Twin in addition to Towne East, Northgate, and Pershing. That summer, the Morningside Mall’s air conditioning failed - not good in El Paso - and many vendors had seen enough and simply bolted. Then foreclosure occurred in November of 1982 and the Mall was essentially all done prior to reaching its 10th Anniversary. The Cinema Twin lasted until September 29, 1983 closing with “The Outsiders” and “Porky’s II.”